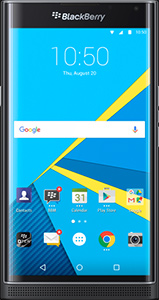 Canadian handset maker BlackBerry Ltd has unveiled its second Android-powered device in an effort to revive its mobile-phone business.

The launch of the DTEK50, its slimmest device, comes less than a month after the company announced that it will stop making the Blackberry Classic.

The beleaguered smartphone maker claims its new device is the most secure Android handset. The phone will retail at $299 (roughly Rs 20, 000). This is far cheaper than its first Android offering, the BlackBerry Priv, which carried a price tag of $649. BlackBerry chief executive John Chen has previously said that the high price hurt the Priv.

It's too early to say, however, whether the handset will help the company boost sales. BlackBerry's handset business posted an operating loss of $21 million for the quarter through May 2016, according to The Wall Street Journal. The company sold 500,000 devices in its latest quarter, down from 2.1 million in the quarter through August 2014.

The new smartphone sports a 5.2-inch screen and an all-touch keyboard. The company has loaded the phone with the propriety encryption technology to protect photos, data and contacts against cyberattacks.

The phone is available for pre-order from BlackBerry's online shop in the US, Canada, the UK, France, Germany, Spain, Italy and the Netherlands. It plans to begin shipping the device on August 8.

The new phone is powered by 1.2GHz octa-core Qualcomm Snapdragon 617 processor. It comes with 3GB of RAM and packs 16GB of internal storage, expandable up to 2TB via a microSD card. For the shutterbugs, the phone carries a 13-megapixel primary camera on the rear and an 8-megapixel front shooter for selfies.

The phone is BlackBerry's slimmest smartphone so far with a thickness of 7.4mm. It is powered by a 2,610 mAh battery and comes with Android 6.0 Marshmallow out-of-the-box.

There is so far no word on the availability of the smartphone in India, but it is likely to be priced below Rs 25,000. However, the market for mid-segment smartphones is crowded with offerings from comanies such as Samsung, LG, OnePlus, LeEco and Lenovo.