How the top local angel networks are seeding startups in India

Indian angel networks have had a subdued financial year with provisional data from most investor groups indicating that they have either struck fewer deals or the same number as the previous fiscal.

Entrepreneurs seeking funding for their new ventures faced greater difficulties in 2017-18 as the undoing of many well-funded tech startups in previous years and lack of exit opportunities made early-stage investors a more cautious bunch.

Angel funding had started to dry up towards the end of 2016-17 and the trend continued in the current financial year. However, a couple of angel networks managed to buck the trend.

Indian Angel Network (IAN) was the most prolific of the lot with 40 investments in 2017-18. IAN had made 30 deals in 2016-17, which means there has been a 30% spike in the number of investments in the year gone by despite a comparitavely dull season for its peers. These numbers do include IAN's overseas deals, the details of which were not immediately available.

With 12 bets, Mumbai Angels Network was a distant second. 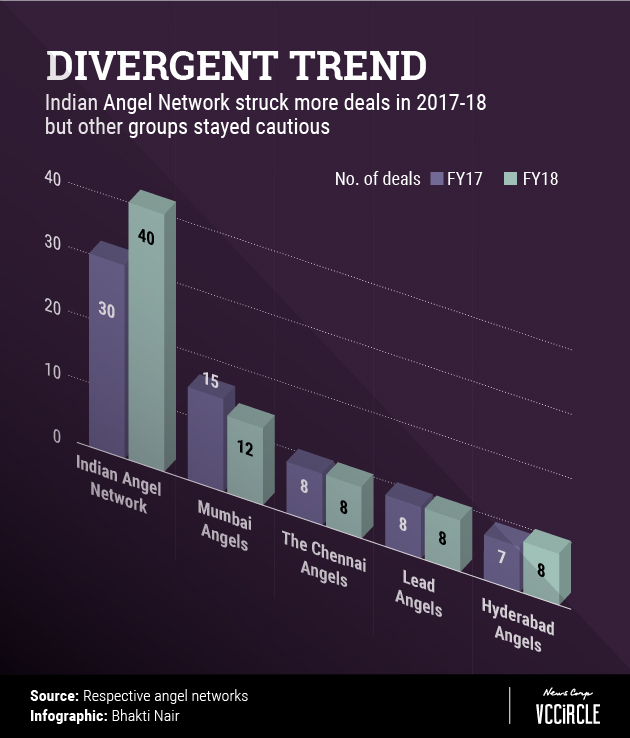 The Chennai Angels, Lead Angels and Hyderabad Angels rounded off the top five active angel networks in India with eight investments each in 2017-18.

IAN, the country's largest angel association with more than 470 active members, spread its money across 10 diverse sectors including education, robotics, hospitality, clean energy, logistics, among others.

Its single-largest investment was $3.5 million (Rs 23 crore) in a firm currently in stealth mode. IAN also had follow-on rounds in companies that were already in its portfolio.

Exits tend to be a sore point for investment firms. IAN, however, has provided several exits to investors and boasts of an internal rate of return (IRR) of 32%, according to co-founder and president Padmaja Ruparel.

IAN's failure rate stood at 15%, which Ruparel said is significantly lower than the industry average.

IAN has an eponymous IAN Fund worth Rs 450 crore and Ruparel says entrepreneurs can raise anywhere between Rs 25 lakh and Rs 50 crore through its platform.

"When it started 10 years ago, entrepreneurs were unable to raise the Rs 2-3 crore required at the seed stage. Today, with the increase in angel investors, an equally important need is the next round funding of Rs 6-30 crore together with mentoring and global reach," she said.

Mumbai Angels had once stood neck-and-neck with IAN in terms of the number of startups it backed, but has since slowed down.

However, the network is expanding to more cities. “In one year, Mumbai Angels has added footprints in Kolkata and Hyderabad. We clearly see that Mumbai Angels' investor appetite for diversity and new models on the horizon is increasing,” said the network’s chairperson, Nandini Mansinghka.

At Rs 3.5 crore, a liquid biopsy company was Mumbai Angels' biggest beneficiary. The network has provided seven exits to investors so far. It currently has 300 investors.

"We are pushing on the regulatory and policy making-fronts. The year 2018 looks better placed as the new tax regime is expected to solve many issues,” said Mansinghka.

The Chennai Angels has made eight investments this fiscal, the largest of which was Rs 2 crore in auto services startup GoBumpr. In all, it has made 35 investments till date.

While the network invests in several segments, software-as-a-service (SaaS) startups are a favourite.

Meanwhile, Singapore Angel Network, which backs a few Indian startups including SpotDraft (legal) and FalconBrick (real estate), made a total of 15 investments in 2017-18 against 20 the previous fiscal.

Founder Satveer Singh Thakral told TechCircle that the family-owned and operated initiative has an active portfolio of 92 companies and has made more than 110 investments over the past five years.

Angel and seed funding is critical for the startup ecosystem as it supports ventures in their infancy – often at the product development stage. It is also the first funding cheque from external investors for most startups.

Google India managing director Rajan Anandan had earlier told VCCircle that the apparent recent downturn was merely reflective of the cyclical nature of investing. He said that valuations are now more reasonable, with companies making progress with a lot less money.

In November last year, a report released by industry body Nasscom echoed the slowdown trend in the startup ecosystem. It said that investors had shifted their focus away from seed-stage ventures to more mature startups and added that the number of tech startups setting up shop in India likely fell by nearly a third in 2017.

One possible deterrent has been the 'angel tax', which has long been a contentious issue in the startup community.

Several startups have been hit with tax notices over funds raised from friends, family, angel investors or angel networks not registered with the markets regulator or as Alternative Investment Funds (AIFs) and if the infusion is higher than the company’s fair market value.

“Angel tax has become a bit of 'devil tax' as it is the startups who are impacted as they have to pay the tax," said Ruparel. "This impedes the growth of the company as valuable cash is diverted to angel tax which reduces the progress that an investee company could achieve."

The industry is hoping for a potential clarification which would mean that those firms incorporated before 2016 that have received up to Rs 10 crore in angel funding won’t have to pay angel tax.

There are also expectations of changes on the policy front.

While announcing his Budget last month, Finance Minister Arun Jaitley had said that venture capital funds and angel investors "need an innovative and special developmental and regulatory regime for their growth".

"The government is working to create a policy framework where not only the angel tax but other impeding regulatory issues do not impede genuine angel investee companies," said IAN's Ruparel. "This is critical as angel investing brings disposable wealth into breeding new startup companies and job creation."

Note: The story has been revised to reflect the correct number of firms backed by Mumbai Angel, as well as to add a new quote from the investment network.