How Google’s Waymo is using AI for autonomous driving

“We used a new machine learning technique called Deep Learning with help from the Google Brain team to teach our cars about the nature of objects on the road and understand how they would react,” said Dmitri Dolgov, CTO and VP, engineering, Waymo, while addressing the company’s developer conference.

Waymo’s self-driving engineers worked side-by-side with the Google Brain team to also apply deep nets to the car’s pedestrian detection system. “Even in those early days, the results were remarkable. Within a matter of months, we were able to reduce the error rate for pedestrian detection by 100 times, making our system safer and more capable on the road.”

This was an obvious jibe at rival Uber whose self-driving car killed a pedestrian in Phoenix, Arizona, in March. Following the accident, many peer companies analysed the car dashcam video and said that the crash could have been avoided. John Krafcik, CEO of Waymo, had then said that his company’s autonomous car software could have averted the accident.

“We are very confident that our car could have handled that situation. It is what we have designed this system to do in situations just like that,” business magazine Forbes quoted Krafcik as saying at a dealers conference in the US. Indian startuo HiTech Robotics Systemz had also made a similar observation after analysing the video. 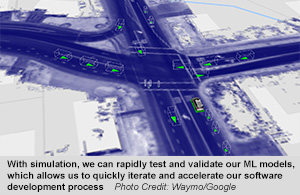 Dolgov said that emerging technology plays a crucial role in nearly every part of its self-driving system. “While perception is the most mature area for deep learning, we also use deep nets for everything from prediction to planning to mapping and simulation.”

He added that with machine learning, the cars can navigate nuanced and difficult situations, such as manoeuvring construction zones, yielding to emergency vehicles, and giving room to cars for parallel parking. “We can do this because we have trained our ML models using lots of different examples. To date, we have driven six million miles on public roads and observed hundreds of millions of interactions between vehicles, pedestrians and cyclists.”

According to Dolgov, the company was running simulations of self-driving and has already driven five billion simulated runs. “At Waymo, we use the TensorFlow ecosystem and Google’s data centres, including TPUs, to train our neural networks. With TPUs, we can train our nets up to 15 times more efficiently. We also rigorously test our ML models in simulation, where we drive the equivalent of 25,000 cars all day, every day. With this robust training and testing cycle, we can rapidly improve our ML models, and quickly deploy the latest nets on our self-driving cars.”

Besides, Waymo is also training cars to work in difficult weather conditions. “Driving in heavy rain or snow can be a tough task for self-driving cars and people alike, in part because visibility is limited. Raindrops and snowflakes can create a lot of noise in sensor data for a self-driving car. Machine learning helps us filter out that noise and correctly identify pedestrians, vehicles and more," he added.

Waymo also claims to be the only company in the world with a fleet of “truly autonomous cars” on public roads. “Members of the public in Phoenix, Arizona have already started to experience these fully self-driving rides. We intend to roll out a full-fledged service of autonomous cars in Phoneix, Arizona, by the end of the year,” said Dolgov.