Vernacular app NewsDog gets $50 mn from Tencent, others

Investors of the news aggregator look to harness the next half billion Indians coming online thanks to data boom unleashed by cut-throat competition in the telecoms industry. By offering content in vernacular languages, the app taps into the future of the internet, which is in the hands of the next billion users—the latest generation of internet users to come online on smartphones in places like Brazil, China, India, Indonesia and Nigeria. 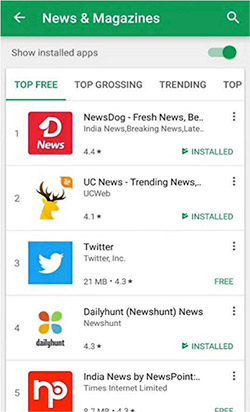 NewsDog plans to use the proceeds to empower individuals and content creators to showcase their work and reach the digital mass public. The company is adopting blockchain to grow faster and make the content ecosystem transparent.

The app’s funding comes two weeks after TechCircle reported that unusual jockeying had broken out for a piece of ShareChat, a regional language social network whose Android app saw more than 10 million downloads since its introduction to the Google Play Store in 2015. This binge of downloading enthusiasm among local internet-mad users has been stoked by cheap waves of data unleashed by cut-throat competition in the telecoms industry. The vernacular app, in addition to regional social networking, gets users localised content such as latest updates on Tamil, Bollywood, Telugu, Marathi and Bengali movies.

Polyculture and multiple languages make content matching an incredibly hard problem. We believe that strong machine learning capabilities will be pivotal in scaling up content platforms in India,” said Chen.

NewsDog is owned by Hong Kong-based Hacker Interstellar. The platform collates short-form news stories in English and vernacular languages including Hindi, Tamil, Telugu, and Marathi. Currently, it claims to have 50 million users across 10 languages. It says it has emerged as one of the fastest-growing content aggregator apps since its debut on Google Play Store in 2016.

NewsDog presently has two offices in India, in Pune and Gurugram, and plans to set up offices throughout the country in 2018. It also launched a content platform WeMedia, which enables users to submit content through it. Presently, WeMedia has over 30,000 writers contributing content. The company aims at doubling its employee strength.

“After the new round of financing, the company’s expansion plans will focus on two aspects, one is to create a more dynamic content platform for users by enriching localised experience by adding more regional languages. The other is to constantly buttress our technical capabilities in order to provide users with a more personalised experience," said Ma.

NewsDog competes with players such as Toutiao-backed Dailyhunt and Tiger Global-backed Inshorts. The differentiating factor of NewsDog is its focus on vernacular news.

Dailyhunt raised $25 million in a Series D round led by ByteDance in October 2016 and currently is in talks with Alibaba for selling a minority stake.

Around the same time, subscription-based news startup The Ken raised around $228,000 (Rs 1.48 crore) from a group of individual investors in its second round of funding.