Global spending on home automation devices to triple by 2025: GlobalData

The total global spending on home automation devices is expected to reach $75 billion by 2025 from $23 billion in 2018, according to a new report from data and analytics firm GlobalData.

According to the report, the growth will be driven by two types of devices -- smart thermostats, which are becoming increasingly common as consumers and governments look to control energy consumption; and smart speakers, relatively recent entrants to the market.

“The advent of smart speakers has had a significant impact across the automated home, as they have enabled simple, voice-activated control of all types of smart devices and, thanks to their relatively low price point, offered an ideal entry point for customers that are curious about home automation," said Ed Thomas, principal analyst for GlobalData’s technology thematic research team. 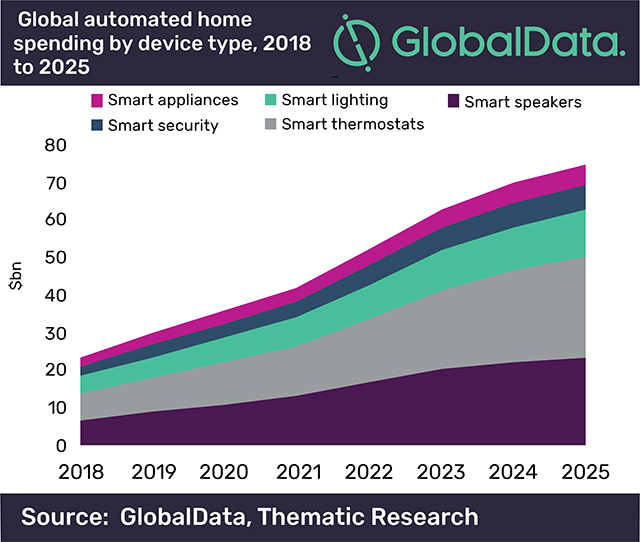 He added that the success of Alexa-like devices has also turned the home into another front in the ongoing war between the giants of the technology industry, including Amazon, Google, Apple, Alibaba and Samsung.

In terms of companies, the Echo range of smart speakers is the foundation of Amazon’s automated home business. The company has looked to build on that with acquisitions, including spending $1 billion on smart doorbell manufacturer Ring.

Google’s decision to bring its automated home business together under the Nest brand should help it compete better with Amazon, the report said.

The company also said that the Chinese market presented a significant opportunity, with Alibaba, Baidu and Xiaomi taking the lead as vendors.

“Samsung is falling behind in this theme – its smart speaker has yet to hit shelves despite being announced in 2018 and the company lacks a unified approach to the automated home of the kind that Google now has following its decision to embrace Nest as its automated home brand," Thomas said.

He added that specialist automated home device vendors, such as Ecobee, will increasingly struggle to compete with the tech giants and will either be acquired or forced out of business.