Mumbai-based Rebel Foods, which operates cloud restaurant brands such as Faasos and Behrouz Biryani, nearly doubled its spends in the financial year ended March 31, 2019, in its quest to stay ahead of the competition in the crowded cloud kitchen market. 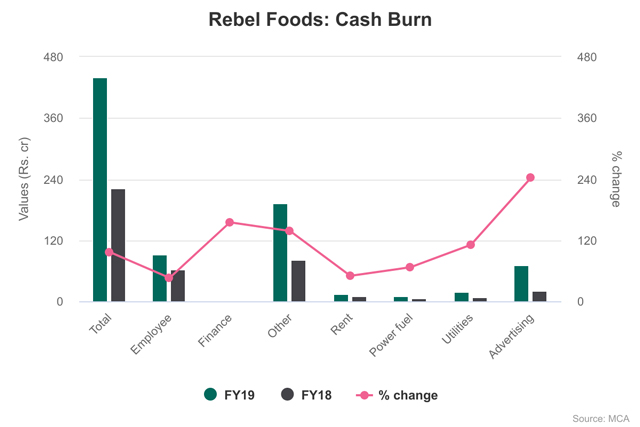 The company, however, is confident of turning profitable soon. “The board of directors is confident that the company will breakeven soon and have high growth rate in the years to come,” it said.

Although the data on net additions in online restaurants and cloud kitchen were not  available, the company added kitchen equipment worth Rs 21 crore in FY19.

As per information on Rebel Foods’ website, the company has 2,100 online restaurants and 275 cloud kitchens in 28 cities in India. Other than Faasos and Behrouz Biryani, the company owns eight brands including Ovenstory, Lunch Box, Mandarin Oak, The Good Bowl.

The company also plans to expand its overseas operations in Southeast Asia and the Middle East. In August this year, it raised $76 million in a growth round led by technology focused hedge fund Coatue Management. It has also invested $4.9 million in Bengaluru-based online beverage delivery startup DropKaffe Food and Beverages.