Covid-19 and the Indian app ecosystem

With the ongoing lockdown getting extended May end and social distancing being the only solution to remain safe, the Covid-19 pandemic is adversely affecting the economy on a large scale. While various health organisations and governments are striving to curb the rate of infection caused by the virus, its impact on consumer businesses goes much deeper.

Majority of apps like travel, hospitality, food delivery and ecommerce are still witnessing a major downward trend. However, apps related to OTT (over the top), news and information, gaming and fintech have again seen a rapid surge in terms of new app installs and overall user engagement.

We have analysed how this pandemic has impacted the overall businesses and more precisely the app marketers in three major categories, namely gaming, news and fintech. The impact has been in terms of a shift in the number of new users, active users and sessions in the first two weeks of April 2020 in comparison to early March 2020.

Based on AdGyde’s analysis, we have observed that between first week of March to the fourth week of March, there has been a constant increase in new users by 1.89%, active users by 1.5% and overall sessions by 2.61%.

But as we go further and analyse the data, from the fourth week of March to the second week of April, we can see relatively a flat trend with a slight drop in new users by 0.8%, active users by 0.16% and sessions by 0.85%. 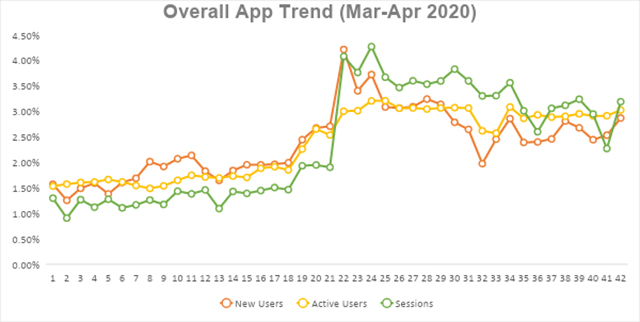 As people are staying put inside their home and spending a majority of time in playing games, the overall app usage in this category has increased. Analysing the data from the first week of March to the fourth March, new users have marginally increased by 0.01%, active users by 0.63% and overall sessions by 0.59%.

As per AdGyde analysis, in coming weeks, gaming apps will show an almost flat or slightly upward trend as people are looking to try out new options. 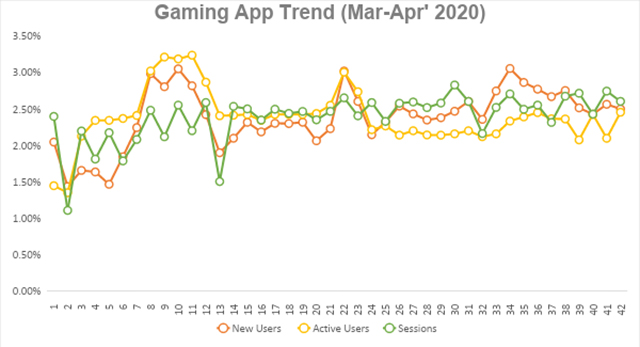 For News Apps, Covid-19 has been a boon. This category has seen a sudden rise since this lockdown being imposed. People are continuously hooked on to their smartphone screens to remain updated with the latest news regarding the current outbreak.

From the first week of March to the fourth week of March, there has been an escalated shift in new users in new apps by 4.3%, active users by 1.73% and sessions by 3.79%.

Fintech Apps such as short loan, peer-to-peer lending, credit score checker have seen a fluctuating trend since the Covid-19  outbreak. Due to social distancing and current halt in the business activities, there has been a considerable low in-app activity.

Between the first week of March and the fourth week of March, there has been a minute increase in new users to 0.72% whereas active users and sessions have dropped to 0.12% and 0.49% respectively.

Moving forward, the exact same trend in numbers can be clearly seen between the fourth week of March and the second week of April. New Users have slightly increased at 0.11% whereas active users and sessions have dropped 0.17% and 0.45% respectively. However, this trend has reversed between the first week of April and second week of April, wherein a marginal drop has been observed in new users at 0.04%, whereas slight surge has been observed both for active users and sessions and it stands as 0.67% and 0.21% respectively.

Arun Gupta is the founder and CEO at MoMAGIC Technologies. AdGyde is a real-time mobile measurement platform that helps advertisers in optimizing the ad campaigns.