Out of the 21 technology unicorns currently headquartered in India, Japanese conglomerate SoftBank Group Corp owns prime stakes in nine, according to the Hurun Global Unicorn List 2020. 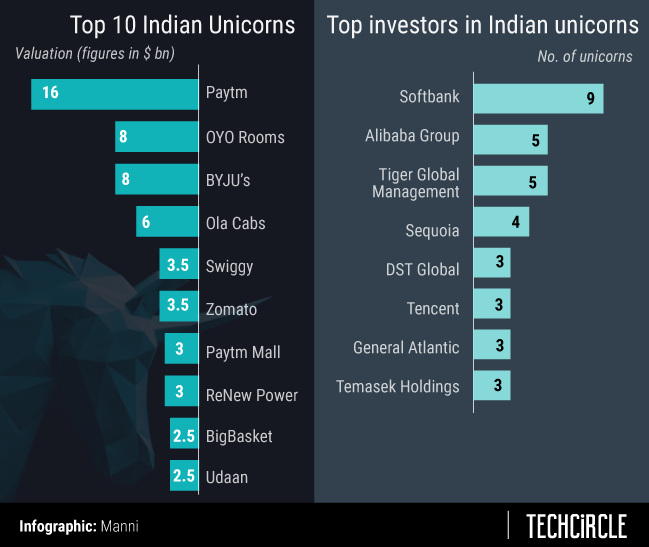 India is the fourth largest unicorn hub in the world, the report said. The 21 unicorns cumulatively carry a valuation of $73.2 billion.

According to the list, payments solutions platform Paytm is the highest valued Indian startup at $16 billion followed by travel-stay finder OYO Rooms and ed-tech firm Byju’s at $8 billion, and cab aggregator Ola Cabs at $6 billion. The Vijay Shekhar Sharma-led company has managed to increase its valuation by a whopping $6 billion over  a period of 12 months while OYO Rooms marked up its valuation by $3 billion and Byjy’s grew its value by $2 billion.

About 33% of Indian unicorns are involved in ecommerce, followed by fintech, which accounts for 14.3%. Shared economy, logistics, and on-demand delivery account for 9.5% each.

Founded in 2017, Ola Electric is the youngest unicorn on the list. The average age of Indian unicorns is seven years, of which two are less than four years old.

Bengaluru continues to be India’s unicorn capital with eight unicorns with a collective valuation of $29 billion. 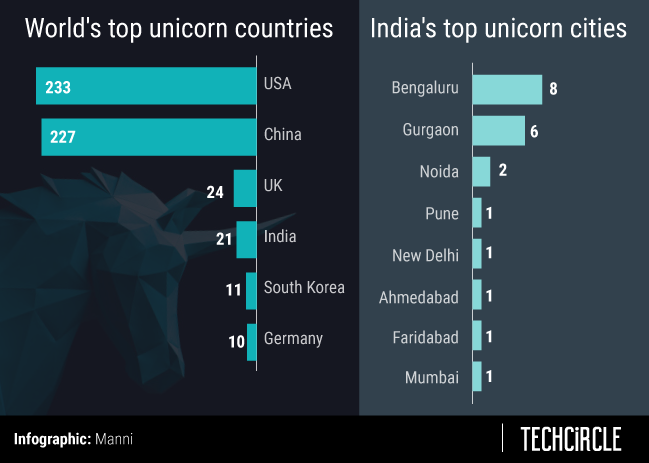 A total of 40 companies located outside India have at least one founder of Indian origin.

“India officially has 61 unicorns, but only 21 are headquartered in India, with the remaining started up by Indians overseas. We hope Hurun Global Unicorn Report 2020 would inspire entrepreneurs in India to create billion-dollar startups, serving the Prime Minister’s call for ‘aatma nirbhar’ Bharat,” Hurun Report India MD and chief researcher Anas Rahman Junaid said.

The report ranks the world’s billion-dollar tech startups founded in the 2000s and not yet listed on a public exchange. It includes all known unicorns as of 31 March 2020.

There are 586 unicorns in the world, based in 29 countries and 145 cities, the report said. Among them, 80% sells software and services, 60% are consumer-facing and 5% are disrupting traditional sectors such as financial services, retail, entertainment, healthcare, logistics and automobile. The total value of all known unicorns in the world is $1.9 trillion. The USA and China accounts for 79% of the world’s unicorns, with 233 and 227 unicorns respectively.

According to the Indian Startup Ecosystem Report published by information technology industry lobby Nasscom last year, India is expected to surpass the US in number of startups. It ranked India third in the list of unicorns after China and the United States.

In another six years, Nasscom expects the number of unicorns in India to grow to around 100.