After two eventful weekdays in the startup ecosystem -- a major acquisition and two new unicorns, Wednesday seemed like a slow day until noon when Twitter began buzzing with news that 'Ahmedabad-based OYO Hotels and Homes’ has filed for bankruptcy.

However, Ritesh Agarwal, founder and Group CEO, OYO Hotels & Homes, has clarified in an official statement posted on Twitter that the pdf circulating about the alleged bankruptcy is completely “untrue and inaccurate”.

OYO Hotels and Homes Pvt. Ltd is a subsidiary of the parent company, OYO, which is run by Oravel Stays Pvt Ltd.

“There is a PDF and text message circulating that claims OYO has filed for bankruptcy. This is absolutely untrue and inaccurate. A claimant is seeking INR 16 Lakhs (USD 22k) from OYO's subsidiary leading to a petition at NCLT,” Agarwal said.

There is a PDF and text message circulating that claims OYO has filed for bankruptcy. This is absolutely untrue and inaccurate. A claimant is seeking INR 16Lakhs (USD 22k) from OYO's subsidiary leading to a petition at NCLT. 1/3

Here’s a copy of the official statement from the company, explaining the issue. 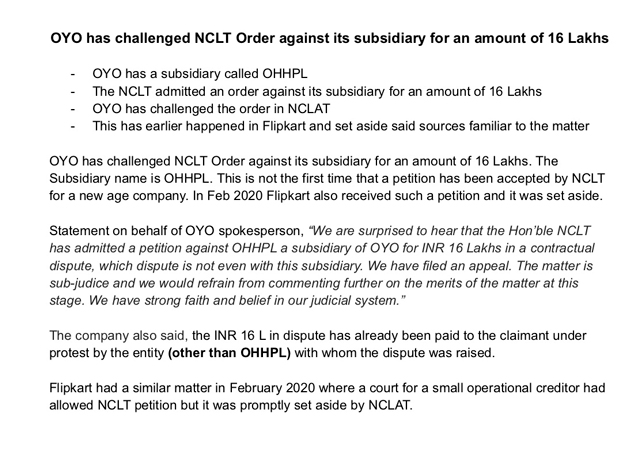 The document that emerged on social media today, under the ‘Regulation 6 of the Insolvency and Bankruptcy Board of India’ stated that the “Notice is hereby given that the National Company Law Tribunal has ordered the commencement of a corporate insolvency resolution process of the OYO Hotels and Homes Pvt Ltd. On 30th March, 2021 (with effect from 1st April, 2021).”

The document led to Twitterati commenting about the alleged ‘bankruptcy,’ with some even comparing the OYO episode with SoftBank’s WeWork debacle.

Is this a new twist in the startup game of capital hunters? #OYO files for bankruptcy!!! pic.twitter.com/athh1XPKb5

OYO declined to share details about the claimant when TechCircle reached out to the company. The matter is under sub judice and will be heard in the court tomorrow, the company said.

In the past, Gurugram based OYO has been in the news for several reasons – from rampant layoffs, issues over partner hotel payments to its contracts. The company recently moved to a common revenue sharing contract model for all hotel partners and has been trying to sharpen business strategies to turn profitable.