Indian startups at the forefront of commercial space age

Two startups in India – Skyroot Aerospace and Agnikul Cosmos – are building and testing rockets, with different architectures, to make access to space more affordable for companies and individuals. Both have lined up the first flight of their rockets in the mid- or end of next year.

If their first flight is successful, the companies plan to mass produce and provide launch services to organizations that want to send small satellites to space for Earth observation, communication, and other purposes.

Agnikul’s focus is on building a single customizable vehicle, with four to seven, three-dimensional (3D)-printed engines for payloads up to 100kg. Skyroot is looking to set up three Vikram series vehicles, which would rely on a unique combination of simple solid -- an engine that uses solid propellants (fuel/oxidizer) -- and liquid propulsion technology and support payloads ranging between 225kg and 720kg.

Read: How Skyroot is making affordable space launches a reality

Currently, satellite launches cost between $30,000 to $80,000 per kilogram depending on the weight of the payload (higher per kg cost for smaller payloads). Skyroot is aiming to cut this down by at least a third with its Vikram rocket while Agnikul is aiming to establish a single reasonable cost across all payload sizes. The latter did not share specifics. 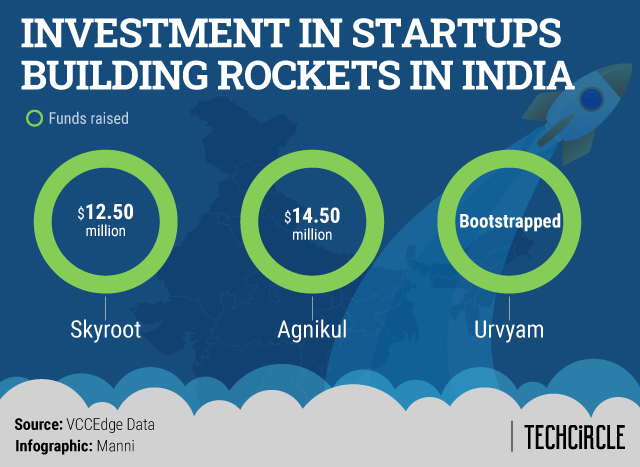 There are other startups with similar ambitions. Bengaluru-based Bellatrix Aerospace and Mumbai-based Urvyam, for instance, are working on rockets but the companies are yet to announce their plans for launch or tech demonstration.  In all, there are over 24 space-tech companies in India developing satellites, rockets, engines, propulsion systems, communication solutions, and other space-tech related stuff.

The sector has also drawn early interest from investors such as Pi Ventures, Speciale Invest, LetsVenture, Graph Ventures, and Omnivore. According to VCCEdge data, Agnikul has raised around $14.50 million, while Skyroot has raised about $12.50 million, towards this end.

Even with funding, launching a rocket is easier said than done given the many operational and technical challenges. According to the Korea Aerospace Research Institute, out of the 11 countries that launched locally-assembled rockets between 1957 and 2008, only three managed to place their satellites successfully into orbit in the first attempt. 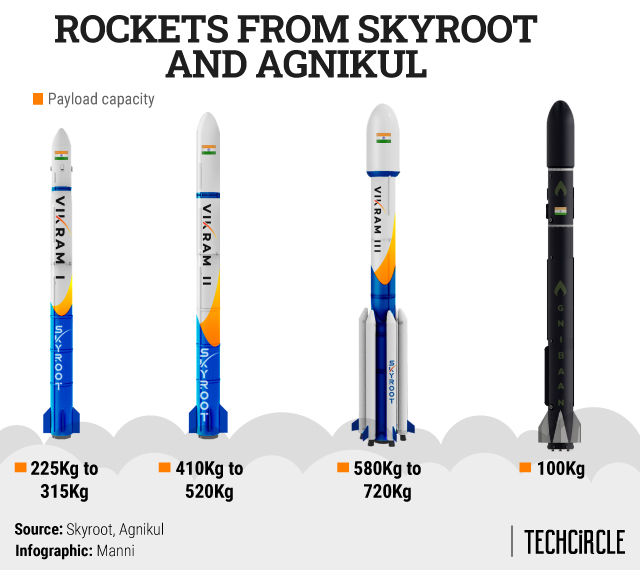 In 2010, for instance, Bengaluru-based Team Indus made headlines when it started working on a mission to send a rover to the Moon as part of the Google Lunar XPrize competition. It is yet to achieve the feat. The competition ended with no winner as no participant could have met the deadline. Team Indus continues to work on platforms for mobility, orbital and landing systems.

“Statistically, based on past data, getting right to orbit on first attempt is almost nil,” acknowledges Pawan Kumar Chandana, co-founder and CEO of Skyroot. He adds, “Most flights fail due to silly mistakes like a technician forgetting a piece of cloth in a fuel line, or an electrical cable snapping out or a bolt breaking due to vibration and structural loads during launch, or even an inertial sensor being assembled in opposite direction by mistake -- anything can go wrong.”

Srinath Ravichandran, co-founder and CEO of Agnikul, corroborates that developing system designs for the first time and setting up the infrastructure to test everything accounts for the major cost. As a result, they must operate on tight margins while ensuring that there’s no shortage in the supply of electronic components, especially due to Covid-led lockdowns. “The entire team has to think together and think of a unified product,” he said, adding they have to manage a very lean process in terms of getting components, assembling them, testing them on the ground, and then moving towards launch.

Both the startups are also working with the Indian Space Research Organization (ISRO) to leverage the expertise, facilities, and launch sites of the space agency for a successful launch.  ISRO has built much of its rocketry (broad industry term that covers design and testing of rockets) supply chain locally in India.

Both these startups have also hired talent that worked previously on ISRO’s rocket projects. Agnikul has an expert panel of retired scientists from ISRO to approve the designs before the go ahead for manufacturing. “These people have actually built and launched PSLV. So, for them, this could be like a toy because it's actually a very small rocket compared to PSLV,” he said.

But what about contingencies to deal with a possible failure? “In all our pricing models, in all our fundraises, we have built into account runway for at least one or two failures,” Ravichandran said. Similarly, Chandana is looking to raise more funds to be self-sufficient for at least 3-4 launches.  “We hope it is successful on first attempt, but in case it is not, we will be gathering the data and coming back stronger in the next attempt,” the Skyroot CEO added.

The global launch services market is valued at around $6 billion and is slated to grow six times over the next decade. India has captured just 1% of this opportunity but has the potential to increase its share by up to 10 times, touching about $600 million by 2030-31. The shift will be driven by startups like Agnikul and Skyroot.

However, to establish their presence in the long-run, these companies will have to focus on ensuring reliability before the element of affordability, according to Narayan Prasad, COO at Netherlands-based Satsearch. He concluded: “Most people building a satellite will look for a reliable launch vehicle first and then look at the cost of that particular vehicle. So, the goal should be to prove that their vehicles are going to be reliable and if they are able to do that, they can challenge the international market by offering very competitive prices that attract international companies to come and launch out of India.”