India tops world rankings in downloads of social apps in first half of 2021: App Annie

India is the leader in Asia, which is the largest region for downloads of social apps in the first half (H1) of 2021 at 60% of the market, reveals a new report by App Annie, a global provider of mobile data and analytics.

“India is the top market by a factor of 5x, surpassing the US in 2018. US, Indonesia, Brazil and China follow – a mix of mature and emerging markets,” the report notes. 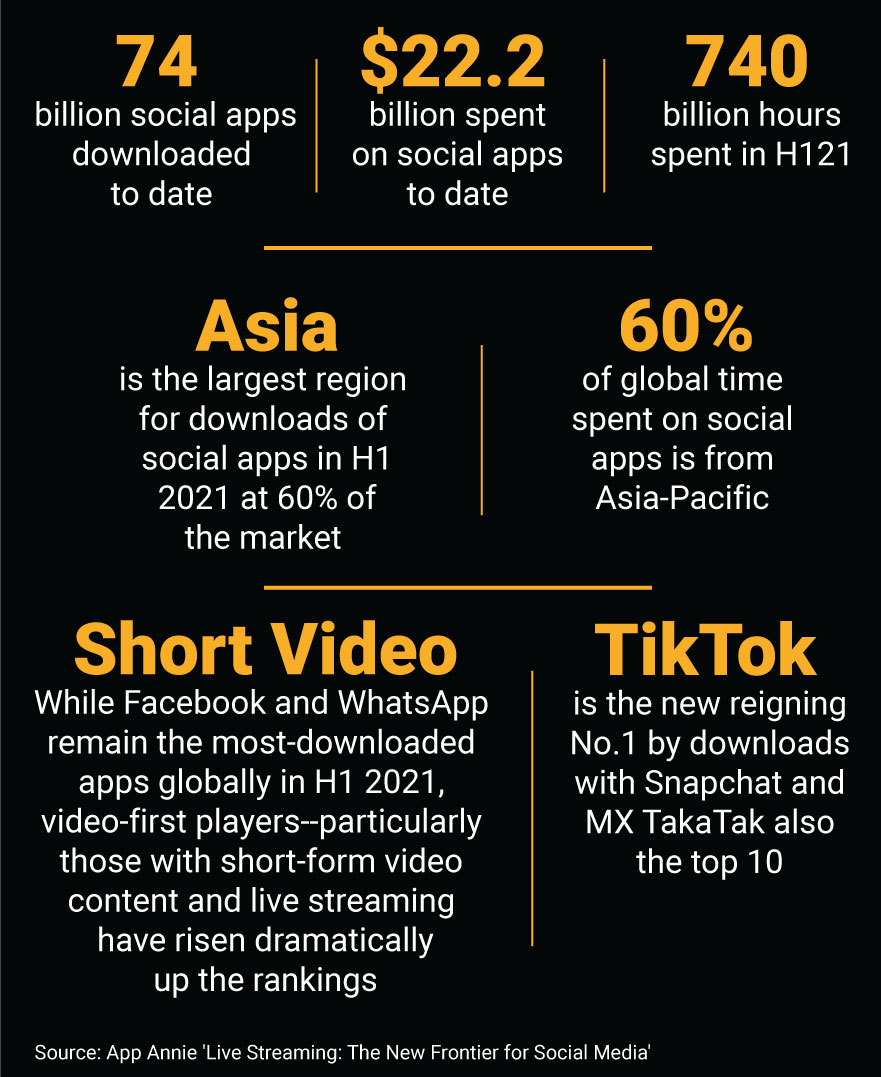 A total of $22.2 bn has been spent on social apps till date, of which $3.2B was spent in the first half of this year -- up 50% over last year. The US, Japan, and China accounted for 60% of this spending on social apps in this period. The US which emerged as the number one market for consumer spend in social apps--saw 1.7 times the spending of the next largest market and represented 30% of the total market fueled by spending in support of content creators and live streamers.

The App Annie report revealed that consumers have shifted to a video-first social experience that favours content creators. While Facebook and WhatsApp were still among the most downloaded apps globally in H1 2021, video-first players, particularly those with short-form video content and live streaming, have risen dramatically up the rankings, with TikTok holding the number one spot by downloads and Snapchat and MX TakaTak finding their place in the top 10.

Consumers are shifting to a model of paying for content creators instead of professionally produced content, indicating a shift towards authentic experiences. “YouTube and TikTok outrank the leading video streaming app, Disney+, showing that consumers are opening their wallets to the creator economy at a level we've never seen before – a positive sign for the industry,” the report said.

In terms of time spent, while YouTube, Facebook and WhatsApp dominated the charts, TikTok has “settled comfortably” at number 6 in H1 2021, from outside the top 10 in 2019. “YouTube remains the leader in the streaming, social and photo and video space due to both depth and breadth of engagement, but the average time spent per user in TikTok has surpassed YouTube in key markets like the US and UK and could shake up the rankings in years to come,” the report said.

Social media platform Snapchat's overseas downloads have grown 45% in the last 12 months compared to two years prior. Asia, Latin America, and the Middle East have experienced a strong uptake in downloads in recent months. The report revealed that downloads in India were up 190% YoY for the 12 months ending June 2021. Pakistan, Brazil, and Mexico were among the top 5 markets for downloads during this time.