The global spending on cloud services reached a record high of $53.5 billion in the December quarter — an increase of 34% over Q4 2020. The report also claimed that worldwide cloud infrastructure services expenditure topped $50 billion in a quarter for the first time in Q4 2021.

The global spending on cloud services reached a $49.4 billion in the September quarter — an increase of $12.9 billion over Q3 2020 and $2.4 billion since last quarter, according to Canalys’ latest estimates. 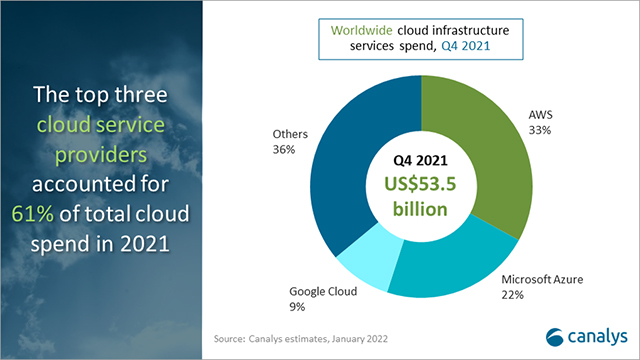 Canalys Research Analyst Blake Murray said, “Compute will be in high demand in virtual and augmented reality environments, while storage, machine learning, IoT and data analytics will be essential to support operations such as digital twinning, modelling and interactivity in the metaverse.” 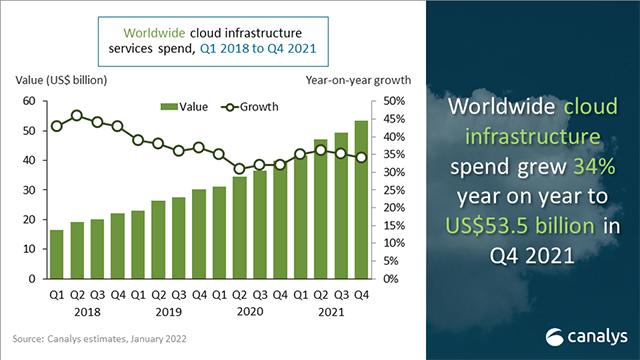 Meanwhile, the top three cloud service providers in Q4 2021, namely AWS, Microsoft Azure and Google Cloud, have collectively grown by 45%. Amazon Web Services (AWS) led the cloud infrastructure services market, accounting for 33% of the total spend. It grew 40% on an annual basis. Microsoft Azure had a 22% market share and was the second largest provider. It grew 46%, driven by long-term consumption commitments. Google Cloud was the third largest provider and grew 63% to account for 9% of the market.

“Continued investment in the metaverse by developers will result in a massive opportunity for cloud service providers, especially the hyperscalers,” stated Canalys VP Alex Smith.

“Building trust with customers and key technology partners will drive competitive positioning for metaverse development, while global infrastructure, edge deployments and 5G connectivity will be necessary for widespread low-latency experiences,” he said.