India’s startups will continue to be headed by men since women entrepreneurs continue to face many challenges including lack of mentors, lack of talent, lack of infrastructure, and limited access to capital and technology couple with lower societal acceptance, insists a new report by Sheatwork--a hub for women entrepreneurs, and research and tech consultancy firm Techarc.

“Going by current trends, India should have more than 200 unicorns or startups with at least $1 billion valuation by 2025. Many of them going public but this growth story will be primarily led by men,” notes the report titled ‘State of Women Tech Entrepreneurship in India’.

Based on a survey of 2,000 women across India including women professionals, students, startup founders and business leaders, the report released on Monday highlights the challenges and opportunities that a woman entrepreneur faces in the technology space today, which is also the world’s third-largest startup ecosystem.

The report points out that despite the number of female students in leading engineering institutes like the Indian Institutes of Technology (IITs) going up from 5% about four years back to 16% now, the number of women entrepreneurs continues to be low. That said, most startups in India are in the technology space and many founders are alumni of some top engineering colleges in the country including IITs. 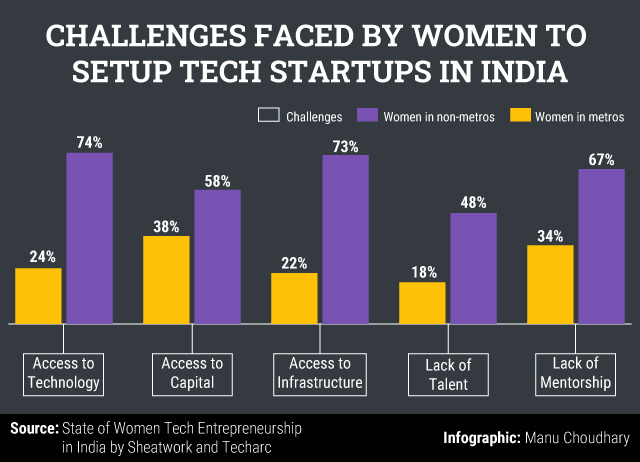 According to the report, almost 48% of women in non-metros are eager to take up tech entrepreneurship as a career option against 23% in metros. The reason is that women in metros often prefer opting for corporate jobs as a convenient career choice. The report further noted that 73% of women in non-metros feel that non-availability of adequate infrastructure deters their move in taking up entrepreneurship, while 22% of women in metros feel that physical infrastructure is a problem for them.

VCCircle in January had reported that gender disparity across the Indian startup ecosystem narrowed only a little in 2021, even as startups managed to raise record funds at high valuations during the year citing a report by homegrown venture debt firm InnoVen Capital.

To be sure, although gender diversity is a national conversation at many fronts, women representation still is many notches lower in the tech industry. Data from Monster.com also shows that the representation of women in tech jobs is 15%, accounting for around 13 lakh jobs across sectors, according to Sekhar Garisa, CEO of Monster.com. And according to a Nasscom report, the representation of women in the technology industry is 36%. It estimates that over 1.8 million women work in the sector and that 200,000 women were hired in FY22.

Building a case for a revamp of the startup ecosystem to make it gender agnostic, the 'State of Women Tech Entrepreneurship in India' report revealed that about 67% of women in non-metros believe lack of mentorship is a key factor for them to not take up entrepreneurship, while 34% of women in metros feel the same.

Further, women in non-metros fear that they may not be able to the right skill set in smaller cities, which hinders their progress, the report noted. About 48% of non-metro respondents attributed lack of skilled and talented team as hindrances in their entrepreneural journeys. However, 18% of respondents from metros feel that finding the right talent is not a hindrance.

According to the report, despite an increasingly-educated population, limited access to relevant business and technical resources was a major impediment in women seeking their own the venture, as 74% of respondents from non-metros and 24% from metros attributed lack of technology as a primary challenge.

“Women shouldn’t merely be consumers of tech but be creators of tech-driven products or platforms. It is for all stakeholders including venture investors, mentors and society at large to ensure that the startup ecosystem especially in the technology space is rich with diversity – not just of ideas but even more women turning entrepreneurs to ensure all round growth of the startup ecosystem,” said Ruby Sinha, Founder, Sheatwork.

According to Siva Prasad Nanduri, vice-president and business head of IT Staffing at TeamLease Digital, the proportion of women in tech roles has nudged up slightly in the recent years as more and more companies are conscious about hiring women, promoting, and building a diverse workforce. There has been a steady increase of about 2.5% of women workforce in the past few years; however, tech companies need to work determinedly to bring a sturdy growth in the coming years.