Six months since social media major Facebook rebranded itself to Meta, and announced plans to build a future where the internet will be made of many interconnected virtual spaces, top industry executives are already starting to lose interest in the concept. The metaverse, which is build using blockchain, augmented reality and virtual reality technologies, among others, drew attention at first but chief executives from top firms don’t see short term value in it.

A recent report by market research firm Gartner said, while technologies like artificial intelligence (AI) remain impactful for CEOs, the metaverse is reported as one of the least interesting areas for the top business executives.

In fact, 63% of CEOs see the metaverse as either not applicable or very unlikely to be a key technology for their business. The survey shows that CEOs consider digitalisation and cybersecurity, coupled with workforce issues, such as talent retention and even environmental sustainability, as their top business priorities in the coming quarters.

According to Gartner, a possible scenario could be that, at present, businesses are striving to change the way they function post the global pandemic. And more recently, incidents such as the Russian invasion of Ukraine have amplified macroeconomic factors, prompting CEOs to deal with issues such as costs and inflation.

Also read: Familiarity with the ‘term’ metaverse goes up, but only 15% understand it

Mark Raskino, distinguished research vice president at Gartner explained, “In the past, some CEOs have embraced new technology ideas perhaps a little too enthusiastically. In the case of the metaverse, however, it’s doubtful the respondents who think it very likely to be a key technology for their business are as confident as they appear to be." 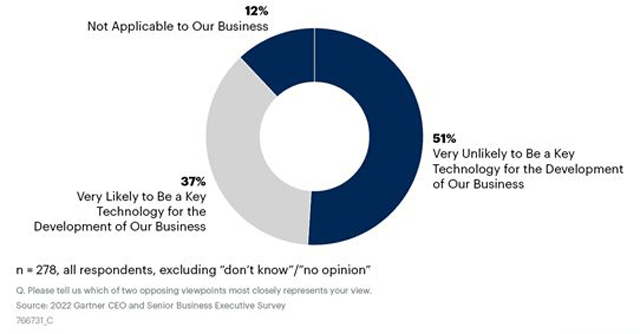 He noted that this doesn’t mean that chief executives aren’t focused on digital business practices, which continue to rise.

Raskino and Gartner aren’t the only ones seeing this trend. Research analyst Prateek Bhajanka, who currently works as vice president of products at security startup BreachLock Inc, also doesn’t see the metaverse coming to the mainstream discourse in the near future either.

“The metaverse would most likely not be in the top of the radar of most CXOs today, because most businesses around the globe have not even digitized their operations fully, and that's the priority,” he said. “The market is too nascent and end users are already experiencing digital fatigue while dealing with emerging technologies. Metaverse being completely in the virtual realm can make it taxing for most people and businesses to embrace it in their day-to-day lives, considering people are again looking to have the access to real-life experiences,” he added.

There are technological challenges too. In a December 2021 blog post, Raja Koduri, the senior vice president and general manager of Accelerated Computing Systems and Graphics Group at Intel Corporation, noted that the computing, storage and networking infrastructure we have today is “simply not enough” for what the metaverse needs.

“We need several orders of magnitude more powerful computing capability, accessible at much lower latencies across a multitude of device form factors. To enable these capabilities at scale, the entire plumbing of the internet will need major upgrades,” he wrote in the post.

It is therefore not surprising that the term ‘metaverse’ plunged from a score of 88 on Google Trends (GT), a service that tracks the most popular combinations, during January 2022, to the score of 32, in the first week of March.