New app finds upcoming yoga classes wherever you are 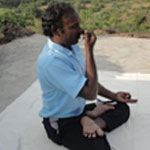 From hatha to vinyasa and everything in between, a new app helps yoga lovers find upcoming classes nearby.

Om Lovers, an iPhone app, detects a user's location and shows yoga classes happening at studios around them, including time and directions.

Classes can be found at nearly 7,000 studios in 63 countries worldwide and can be filtered by time and type, including hatha, power flow, vinyasa and hot yoga.

Yogis can also keep up with the schedules of their favorite instructors. The app has over 30,000 instructor profiles, which include a schedule of their upcoming classes.

According to Rachel Acheson, vice president of brand and community at Lululemon, the turnover for yoga is high. Although there are approximately 20 million people practicing yoga, about 20 per cent drop out every year.

"The new people to yoga every year is substantial," said Acheson. "Finding your teacher is one of the biggest things that drives commitment to the practice."

Users can invite friends to join in on class by sending a text, tweet, email or Facebook message through the app, and keep track of the classes they're headed to.

The app launched Thursday and by Saturday had been downloaded over 18,000 times. It secured the top spot in the Health and Fitness category on Apple's App Store in Canada, and the third spot in the category in the US

It is the first digital experience that the company has developed in-house, and is part of Lululemon's push towards creating hyper-local experiences for consumers.

"That connection with our guests and studio partners is happening on a local level," Richardson said. "Our digital strategy is people-first. Our goal is to build authentic relationships with communities."

Although users can add a class to their schedule, which syncs with the calendar app, it is not yet possible to book or pay for a class within the app.

"We're waiting to see what guests want, and we're not confident they're going to want to book," Richardson responded, adding that the company is actively monitoring feedback.

The company will continue to monitor demand for other platforms, but the company's customers are predominantly iPhone users, according to Richardson.

A similar app called Mindbody Yoga is available for iPhone, created by Mindbody, the company that supplies the data about classes, studios and instructors used in Om Finder.

It allows users to book and pay for classes if the studio supports that capability. It does not, however, provide the social features found in Om Finder, or information about in-store classes.

Another app called GoRecess, available on the web, allows users in the United States to find and book fitness classes in their cities, including yoga, strength-training, dance martial arts and boot camp classes.