After thrilling sessions / interactions at the Olacabs and Quikr office, it was now time to move forward to the next location of Startup Walkabout- the Nexus Venture Partners office at Worli. It seemed as if the thunder god felt our excitement as we took a cab to the NVP office, because the downpour just kept coming.

But even that could not dampen the spirits of the participants, who turned up in great numbers, so much so that the place became over-crowded and people had to stand in order to fit in the conference room. After all, who would want to miss out an opportunity to interact one-on-one with one of the leading venture capital firms of the country. Once everyone settled, Brij Bhushan, VP and Jishnu Bhattacharjee, MD at NVP greeted the participants and started with their presentation, which was focused on the topic 'common mistakes made during fund raising; the dos and don'ts'.

Without doubt, the session turned out to be the most extensive (in terms of the information shared) as well as expansive (in terms of the topics covered) among all the sessions we attended during the course of the day. Post the presentation, participants blitzed the speakers with a never-ending line of questions, due to which the session extended way beyond its scheduled time. Here is a summary of the points touched upon during the discussion. 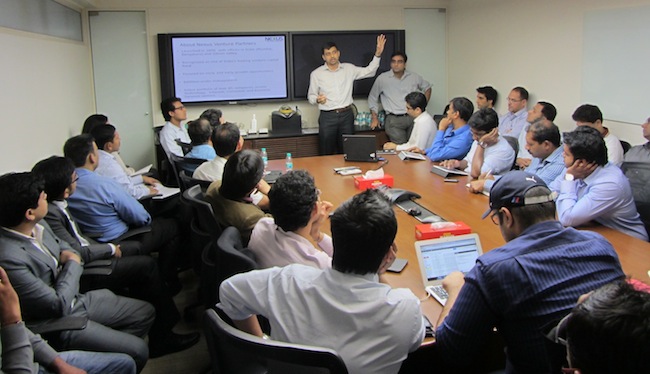 Nexus Venture Partners manages $600 million across six funds, likes being the first institutional investor in its portfolio companies, and has made over 50 investments till date, out of which the firm has seen six exits. For every 'yes', the firm has said 'no' to 10-12x number of companies.

The first thing founders should ask themselves before looking to raise venture capital funding is that whether they even need the funds. There are a lot of companies that do not have the required scale potential to excite VC funds but still go out for funding, which they never get.

1. Is the market being addressed by the company large enough? What is the growth potential of the company and how fast can it achieve the same?

2. There has to be uniqueness about the company- be it its business model, the geography targeted, the needs it is looking to serve, etc. 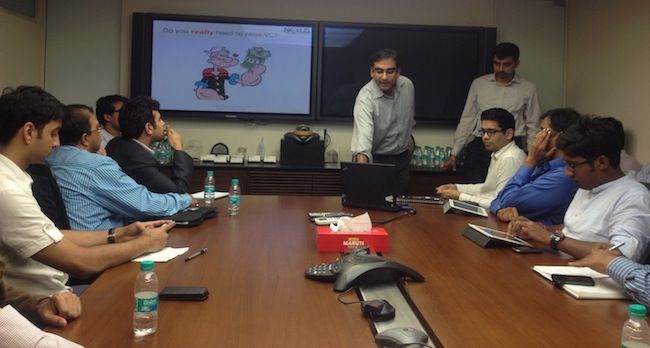 Although in very rare occasions, when VC's meet exceptional people with amazing ideas, they can go beyond the call of duty and invest in just an 'idea' as well.

Companies should maintain healthy relationships with their VCs, giving regular updates on their progress. You can't expect to maintain complete radio silence for long periods and then make abrupt demands of raising funds.

There is no set parameters on the 'right time' to raise VC funding. It changes from company to company. Although once that time comes, companies should focus on it rigorously. The companies should always do their own research and never forget to hire a good lawyer before finalising the deal.

A 'warm introduction' is the best way to approach a VC, since it gives out a signal (to the VC) that the company has the ability to build and maintain networks- a must have for any company looking to make it big. Email follows in at a close second, since all VCs make it a point to reply to their mails (its after all their bread and butter). But 'cold calls' are a big nono.

The speakers also shared the do's and dont's while sending an email to a VC, guidelines for following up with them, and the things to do when you dont hear back from a VC. 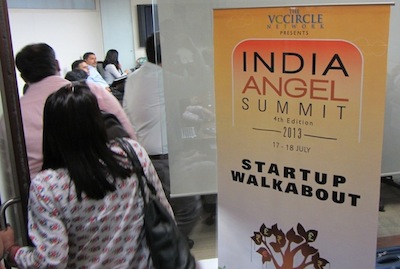 We began the live coverage of Startup Walkabout, a unique initiative by VCCircle as part of the India Angel Summit 2013 at the Olacabs office, followed by the Quikr office- you can read more about that here and here.

With this we come to the end of the coverage for day 1, but the excitement is far from over. In its new avatar, India Angel Summit is a two-day initiative and the second day will be loaded with exciting keynotes, debates and special sessions involving more than 25 speakers, including top entrepreneurs, early VCs and angel investors, hosting topics such as: scaling a startup to a world class company; tackling the scarcity of Series A; bootstrapping versus venture funding; preparing your company for funding; secrets of lean marketing, and more. The summit will also host two special sessions—Pitch-10 and Co-Founder Hunt. So don't miss it.