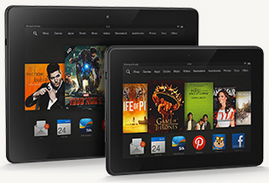 A day after slashing the prices of its Kindle Fire HD range of devices in the Indian market, Amazon has now unveiled an upgraded line of its flagship Kindle tablets. The new devices, christened Fire HDX 7 and Fire HDX 8.9, will replace the existing HD range and probably that's why the company is offering them at such reduced rates. As of now, the 16GB 7-inch Kindle Fire HD tablet is available for as low as Rs 11,999, while the 32GB model is available for Rs 15,999 (reductions of 25 per cent and 15 per cent, respectively, compared with the original price).

The new Fire HDX tablets are named so due to their display, which the company claims brings together high pixel density, perfect colour accuracy (100 per cent sRGB), reduced glare and improved brightness. The display also features dynamic image contrast, which automatically optimises the colour of each pixel based on the amount of light in your surroundings. This makes images and videos easier to see in any lighting conditions, including outdoors. Here is a look at the specifications of the new tablets. 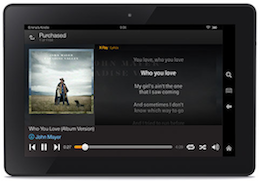 The tablet has a front-facing HD (720p) camera for video calling and on the connectivity front, it comes with Wi-Fi, optional 4G (depending on the region) and also has a microUSB port and a microHDMI port. The dimensions of the device are 186 mm x 128 mm x 9 mm and its weight is 303 gm (311 gm for the Wi-Fi + 4G version). The company claims that the tablet will provide up to 11 hours of battery life and 17 hours of reading time. For enhanced sound, the company has also provided Dolby Audio dual-driver stereo speakers. 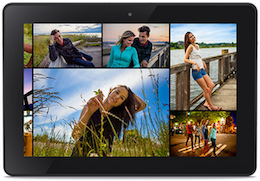 In addition to the front-facing HD camera for video calling, the company has also provided an 8-mega pixel rear camera (the first time a Kindle tablet sports one) with LED flash (with electronic image stabilisation and f/2.2 lens) that can also record videos. On the connectivity front, it has Wi-Fi and optional 4G, along with a microUSB port and a microHDMI port. The dimensions of the device are 231 mm x 158 mm x 7.8 mm, and its weight is 374 gm (384 for the Wi-Fi + 4G version). The company claims that the tablet will provide up to 12 hours of battery life and 18 hours of reading time. This one also comes with Dolby Audio dual stereo speakers for better quality sound.

The tablets are powered by the latest version of Fire operating system (OS 3.0 Mojito), which is basically a customised Android OS that comes with Amazon cloud services, built-in media libraries, productivity apps, and low-level platform enhancements to integrate Amazon's digital content in the tablets. A few key features include:

Easier content management: A new one-tap archive frees up space on the user's tablet by identifying items that have not been used recently and providing a one-tap option to quickly move them to their cloud (for later retrieval). In addition, optimised download ensures the performance of the app you are currently using isn't affected by background download activity.

Faster access to apps and info: The OS also includes a content-first home screen that allows users to easily switch between viewing their recent content and apps in carousel or grid view. The 'Quick Switch' feature uses a side swipe gesture to easily move between multiple apps or individual content items without navigating home.

In short, the new tablets have a much better display, a faster processor, offer more storage, and are thinner and lighter than their predecessors. The company has also introduced a 'Mayday' button for on-device tech support. Users can simply tap the button to be connected to an Amazon expert who can co-pilot you through any feature by drawing on your screen, walking you through how to do something yourself, or doing it for you (whatever works best). Throughout the process, you will be able to see your Amazon Tech advisor live on your screen, but they won't see you. The service is free of cost and will be available 24x7, 365 days a year.

The Wi-Fi only version will begin shipping on November 7, while the Wi-Fi+4G version will be available starting December 10. Although the devices are available for pre-order on Amazon' US site, an India pricing and launch date has not been disclosed by the company as of now.