HTC One's successor to be called One Two, may come with changeable camera lens 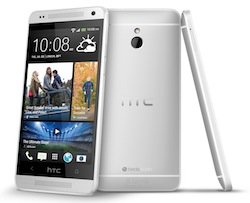 Taiwanese smartphone and tablet manufacturer HTC will launch the successor to its flagship One smartphone early next year. The device will be called HTC One Two, and could come with changeable camera lenses, according to a Forbes report. What this basically means is that the smartphone will sport separate camera lenses for low and high lighting conditions.

In comparison, the original HTC One has a 4 megapixel HTC UltraPixel camera (with BSI sensor and an HTC ImageChip 2) with 'smart flash' that can record full high definition videos (1080p) at 30 frames per second. The camera includes an f/2.0 aperture lens and a sensor with UltraPixel that the company claims gathers 300 per cent more light than traditional smartphone camera sensors, providing good low-light performance. Plus, it has a 2 MP secondary front-facing camera that can record full HD videos as well.

Similar to its predecessor, the new device will also run on the Android operating system, and should be launched in the first quarter of 2014 (probably at the Mobile World Congress to be held in February next year). Other rumoured specifications of the device include a 4.9 inch screen (slightly bigger than the 4.7 inch screen of One), Qualcomm processor, and a fingerprint app (taking cue from Apple's iPhone 5S). The report further states that the smartphone could be priced around $600 (Rs 37,103).

In a world dominated by the likes of Apple and Samsung, Taiwanese smartphone and tablets manufacturer HTC's flagship 'One' came as a surprise entry in the smartphone market. Launched earlier this year, the smartphone was a perfect mix of hardware and looks, so much so that the company followed it up with a complete series of One smartphones that included a mini (Rs 33,999), a dual-SIM (Rs 45,759) and a max version (Rs 53,490) of the smartphone.

HTC One features a 4.7 inch full HD Super LCD3 capacitive touchscreen display (1920Ã—1080 pixel resolution) with 468 pixels per inch density and runs on the Android 4.1.2 (Jelly Bean) operating system with HTC Sense user interface. It is powered by a Qualcomm 1.7 GHz quad-core processor, has 2 GB RAM and in terms of internal memory, users can choose between 32 and 64 GB models. On the connectivity front, the device has Infrared, Bluetooth 4.0, Wi-Fi, 3G, Near Field Communication (NFC) and 4G (depending on the region). It also has a microUSB port, a 2,300 mAh battery and comes with A-GPS support. HTC One measures 137.4mm x 68.2mm x 9.3mm and weighs 143 gm. The device has a zero-gap aluminium unibody and is available in silver and black colours.

HTC One HTC One Two