While the amount raised is not disclosed, sources close to the development informed Techcircle.in that the startup has raised about Rs 50 lakh.

"We have 500 Sherpas (local guides) from 26 cities and are aiming at taking this number to 10,000 across the cities. The funds will last us for about a year," SeekSherpa's co-founder Dhruv Raj Gupta said.

The startup adds Sherpa with the help of interns in newer cities. So far, it has about 15 interns and one full time employee.

Founded by Gupta and Sukhmani Singh, both commerce graduates, the startup uses mobile application technology coupled with 'Google Cloud Messaging' to create a mobile platform where locals can post experiences. Travellers can book these experiences and also post questions, which they can direct to a local of their choice. Prior to starting up, Gupta worked at Google, while Singh worked as an analyst at AT Kearney.

Basically, it connects travellers with locals, besides curating and generating customised local experiences for travellers while empowering locals to meet them (travellers) and earn pocket money via the medium. Typically, any experience is less than Rs 3,000 per traveller and does not last more than three hours from start to end. The experience could include local music lesson, food tasting and photography drive to lesser known monuments, among others. 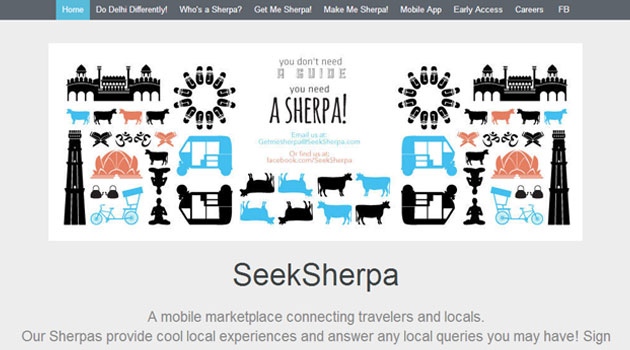 Last week, VentureNursery, an angel-backed startup accelerator programme had announced that it is increasing its investment capability by getting on board more angels who also have expertise in taking startups global.

VentureNursery has accelerated 14 startups to date of which eight have secured seed funding including Oravel, Catapooolt, Klip.in, Interview Master and InvenZone, The Venturator and Peter's Pan. The accelerators' first investment Oravel Stays has already given it 3X returns in a very short period.

The accelerator was founded in March 2012 by angel investors Shravan Shroff, founder and former MD of Fame Cinemas; and Ravi Kiran, former CEO- Southeast & South Asia, Starcom MediaVest Group and co-founder & managing partner of Friends of Ambition. It conducts at least two boot camps a year in Mumbai, and targets to accommodate up to eight startups in each programme. At the end of each programme, graduating startups are evaluated for investment. The accelerator is currently focusing on six sectors â€“ media & entertainment, retail, e-commerce, consumer technology, education and cleantech.