MobiKwik in talks with venture funds to raise a large round

Gurgaon-based One MobiKwik Systems Pvt Ltd, which runs online recharge platform and mobile wallet venture MobiKwik.com, is in advanced talks with venture capital firms to raise a large round of funding.

Although sources close to the development told Techcircle.in that Sequoia Capital is in talks with the mobile wallet firm to lead its next round of funding with $20 million investment, the company has vehemently denied it's raising money from Sequoia.

Techcircle's sources say the total size of the round will be about $30 million, and could also see participation from two other investors, including VC funds based out of India and Southeast Asia.

When contacted, Upasana Taku, co-founder and head of business development & merchant operations at MobiKwik,said, "MobiKwik is raising a large round for which we are in talks with other global investors and not Sequoia Capital. We would not like to divulge round size or investor names at this point. I can confirm that the round size and investor names mentioned in your story are incorrect."

MobiKwik had earlier raised under $5 million in its Series A funding from an unnamed US-based VC firm last year.

Taku said in an email that  they have seen "strong growth in the mobile wallet business in 2014 especially in e-commerce with 15 million MobiKwik users transacting across 20,000 merchants like Jabong, Snapdeal, Shopclues, Dominos, eBay, etc."

She said the fundraise will help them continue their wallet expansion aggressively with newer models and a larger network of merchants pan India.

Taku also added they have put in an application to the RBI for a Payments Bank licence. "This is aligned with our goal to reach 100 million mobile Indians with a low cost payments and banking solution," she said. 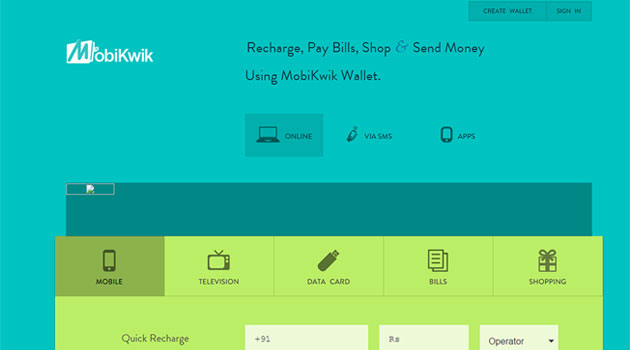 Founded in 2009 by Bipin Preet Singh (CEO) and Taku, MobiKwik enables prepaid mobile, DTH and data card recharges, post-paid mobile bills payment and utility bill payment for electricity, gas and landline connections. It also offers these services via SMS, phone and apps that are available for Android, iOS and Windows platforms. The firm recently revamped its website and logo.

The company claimed that it has partnered with more than 5,000 businesses across e-commerce, online food ordering, cab services and QSR chains in the country to offer digital wallets so that consumers can directly pay from their wallets while shopping online. Consumers can also make P2P money transfer using the wallet.

Currently, the company is focusing on India. However, it is planning to foray into various foreign markets in Asia and Africa by mid 2015.

(The story has been edited based on the latest information provided by the company. The company has also denied it's raising funds from Sequoia which was the original headline of this story.)