Quikr to launch a separate classifieds site for real estate 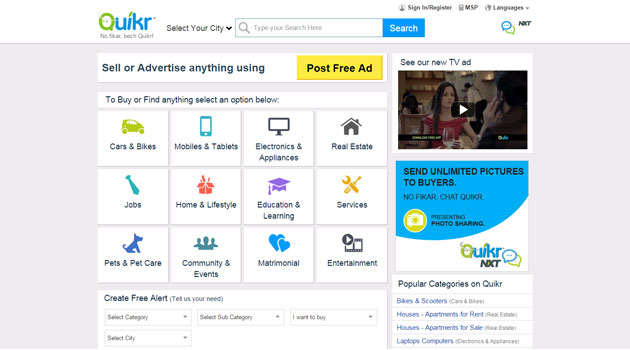 Mumbai-based Quikr India Pvt Ltd is launching a new classifieds website for real estate called quikrhomes.com to allow B2C as well as C2C discovery of properties up for sale as well as those available for rent. The new website URL currently redirects to the mother site but would go live in the next four to six weeks.

"Over the last few years, what we have built is a classifieds mothership that operates in a number of categories. People don't realise how big Quikr is in areas like real estate, cars, services etc. We figured it is time to tell the world about it and launch some big boats from the mothership," said Pranay Chulet, CEO, Quikr.

The news of the separate website was first reported by The Economic Times.

"We have over 2 million listings in real estate. They cut across new real estate projects being marketed by developers as well as secondary sale and rental listings posted by consumers and brokers," added Chulet.

He said currently close to one third of Quikr's real estate listings are for apartment rentals and the rest of spread across apartments and land parcels up for sale as also listing for commercial properties.

Founded in 2008 by Chulet and Jiby Thomas (who later quit), Quikr was originally started as Kijiji India. The firm later rebranded to Quikr. It is a large scale cross-category classifieds business with over 30 million consumers. These consumers come to Quikr to sell, buy, rent or find products and services. Quikr claims it is present in over 1,000 cities in India and operates in over 13 categories and in 170 sub-categories that include mobile phones, household goods, cars, real estate, jobs, services and education.

In January 2015, it added an instant messaging (IM) feature named Quikr Nxt that enables users to chat with multiple users and share images.

It competes with the likes of OLX among others.

In the property listing and classifieds space there are a bunch of new generation ventures besides larger and older firms such as MagicBricks, 99acres and IndiaProperty.

Some of the newer ventures include CommonFloor, PropTiger and Housing. PropTiger is backed by News Corp. In March 2015, News Corp acquired the company that runs this news website.