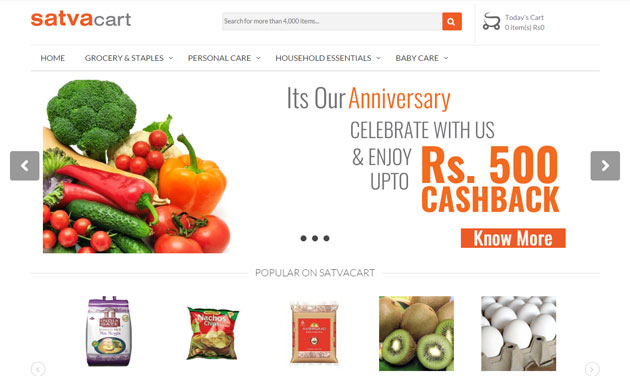 Grocery e-commerce startup Satvacart Retail LLP, which currently operates in Gurgaon, has raised an undisclosed amount in seed funding from Delhi-based early and mid-stage VC firm Palaash Ventures and a group of angel investors, it said on Tuesday.

A former managing director of a leading private equity firm also participated in this round of funding, Satvacart said without disclosing the name of the individual investors.

The company will use the capital to scale up operations, acquire more customers and expand the team, it said.

Rahul Hari, founder and CEO, claims that Satvacart has over 80 per cent repeat customers and that it has zero return rates on perishable items.

"We have seen more than 100 per cent month-on-month growth in the past six months. We believe we are at the right juncture and at the right time to make the most of the opportunity in the e-grocery space," Hari, who is an IIT BHU graduate, said.

He also has an MBA from the Canada-based Queen's School of Business. Previously, he worked with companies such as Cleartrip and NetApp.

Satvacart aspires to be in six more cities by the end of this financial year. "The ground work for four cities is already in place," Hari said.

"Along with good operational know-how, the Satvacart team has also displayed growth and the ability to connect with its customers leading to good organic reach. We expect to see them scale fast going ahead," said Tapesh Singhi, partner with Palaash Ventures.

The grocery delivery industry in India is witnessing a lot of investor interest for both inventory-based models such as BigBasket and delivery models like Grofers, PepperTap, ZopNow and others. BigBasket recently expanded into the Delhi NCR market.

Major horizontal e-commerce players have also evinced interest in the Indian online grocery space with Amazon testing local deliveries with neighbourhood grocers as partners on its marketplace (starting with Bangalore).