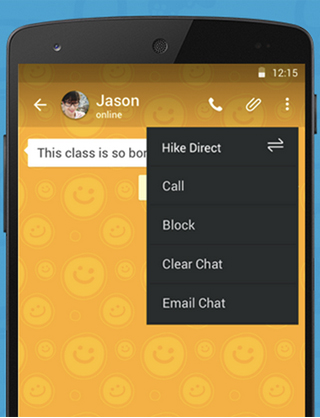 Instant messaging app Hike has launched a new feature that will enable users to share files without an internet connection in a 100-metre radius.

The new feature, named Hike Direct, allows users to send pictures, stickers, files and messages at a speed of up to 40Mbps with low latency.

It is being rolled out along with the app's update on Android and will be launched on iOS and Windows platforms next year.

The app service, run by Hike Ltd, also said that it crossed 70 million users in September and that users spend at least 140 minutes a week on the app.

Earlier this year, it had acquired free voice calling app Zip Phone from US-based Thought Mechanics Inc for an undisclosed sum to expand its product range in the internet-based communication space.

Last September, Hike had secured $65 million (Rs 400 crore) in funding from a group of overseas investors led by Tiger Global.