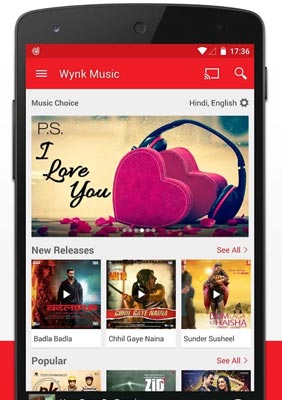 Two-thirds of downloads were made by users who do not subscribe to Bharti Airtel's mobile telephony services, the company said in a press statement.

The average Wynk user plays about five hours of music every month. Wynk clocks about five million music streams and downloads per day, it added.

The app, which is available on Android, iOS and mobile internet, was formally launched today for Windows Mobile users. Its latest version also features a 'Save Data' mode which reduces data charges by 70 per cent, Wynk said.

Launched in September 2014, the music streaming app claims to have a library of over two million songs. It houses over 500 music labels and competes with the likes of Gaana, Saavn, Hungama and Rdio.

In October, handset maker Micromax invested an undisclosed sum in Times Internet-owned Gaana. The company claims to have 20 million active users and reported an eight-fold growth in annual music consumption.