Roder raises $240K in seed funding from Unicorn, others 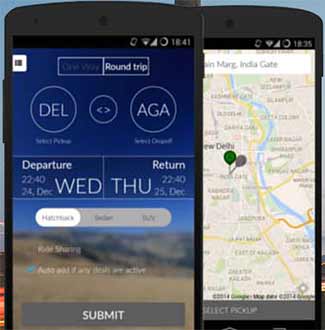 Delhi-based Vecto Technologies Pvt Ltd, which operates inter-city cab aggregator Roder, has raised around $240,000 (about Rs 1.6 crore) in seed funding led by Unicorn India Ventures and a clutch of other investors.

Founded in December 2014 by IIT-Kharagpur alumni Abhishek Negi, Ashish Rajput and Siddhant Matre, the startup kicked off as a marketplace for cabs called Instacab. The outstation cab service was launched in January 2015 and it was subsequently renamed Roder in October.

"Our decision to invest in Roder is driven by the fact that their business model is scalable and this space is set to witness action and growth in the next few months," said Bhaskar Majumdar, managing partner, Unicorn India Ventures, said in a statement.

Unicorn India Ventures, founded by Majumdar and Anil Joshi, is an early stage venture capital fund that is focused on B2B startups in the SMAC (social media, analytics and cloud) sector. The fund plans to invest in 10-12 startups a year, thereby creating a portfolio of 30 companies in three years.

The USP of Roder's model is the elimination of the two-way fare for a one-way ride which is currently the norm across a broad swathe of inter-city cab operators. While intra-city cab services in large cities is dominated by the likes of Ola, Meru and Uber, inter-city travel is still an unorganised market. While a few funded ventures such as Meru, TaxiGuide and Savaari do offer a booking platform for outstation travel, most of them charge a two-way fare for a one-way trip. Ola too offered inter-city travel services but discontinued it soon after.

According to Negi, the demand for booking one-way rides via the Roder platform has grown from 5 per cent to 70 per cent from its early days. Roder is planning to launch ride-sharing services, akin to what Uber, Ola and Meru have for intra-city travel.

Roder has more than 4,000 drivers and is present in 13 cities â€“ Delhi-NCR, Chandigarh, Amritsar, Ludhiana, Jalandhar, Agra, Dehradun, Rishikesh, Haridwar, Jaipur, Ajmer, Pushkar and Kanpur. The cab aggregator follows a hybrid model with some of the cars owned by the startup while the rest are driver-owned cabs. It has launched an Android app and also accepts booking via its website and call centre.

Roder hopes to offer its services in 60-70 cities by the end of the year.

"We have generated a gross merchandise value of over Rs one crore by fulfilling 500 rides on a monthly basis, with an average ticket size of Rs 5,500," said Negi.

In November last year, WAAH Taxis Pvt Ltd, which runs outstation travel taxi aggregator AHA Taxis, and has a tariff model similar to that of Roder, raised an undisclosed round of angel funding from ah! Ventures.