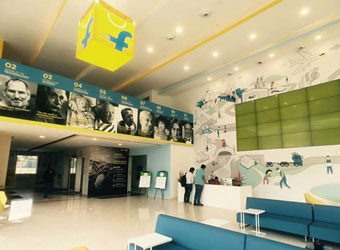 This could probably be music to Flipkart CEO Binny Bansal's ears. The online retailer, which was recently in a controversy after deferring the joining date of campus recruits from IIM-Ahmedabad, has topped a list of India's best employers.

The list by professional networking platform Linkedln ranked 25 companies in India after a survey. LinkedIn said it analysed "billions of actions" taken by its more than 433 million members worldwide to come up with a blended score that it used to rank the winners in each country. The survey used parameters such as job applications, engagement and how long new employees stay with a company to find out the best companies in terms of attracting and retaining talent, LinkedIn said.

"Flipkart was the original startup poster boy and that aura continues to draw ambitious professionals. A unicorn status and much media hype hasn't changed things much. It is a place where risk taking is encouraged," LinkedIn said. It also hailed some Flipkart initiatives such as six months of maternity leave and sabbatical options as firsts in the Indian corporate landscape.

The development comes as a piece of good news for Flipkart, which faced flak last month after postponing the joining date of students it hired from the country's premier management institute citing organisational restructuring.

Flipkart was followed by Jeff Bezos' Amazon, which has been closing the gaps with the Indian e-commerce company, on the LinkedIn list. Snapdeal, the third major e-commerce player in India after Flipkart and Amazon, was ranked 11th on the list.

The report could also be looked as a sort of validation for the success of the consumer Internet growth story in India. Flipkart and Amazon pipped giants such as Google, KPMG, Deloitte, Reliance Industries, Tata Communications, Mercedes Benz and Cisco. A number of other consumer Internet startups including Ola, Oyo, Housing.com, MakeMyTrip and Zomato were also on the list.

This article has been modified to update the methodology used for the LinkedIn survey.