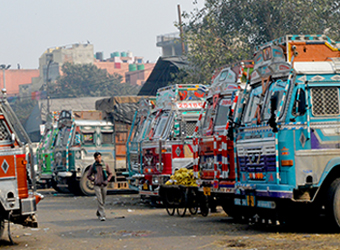 Three months after Delhi-based truck aggregator TruckMandi announced that it is going to rejig its business model as it was finding it difficult to operate, it appears that the startup has now shut down its operations.

The Truck Mandi app when downloaded was not accepting log-ins and the web site of the firm is also not working. Repeated attempts to reach Ankit Jain, co-founder of Truck Mandi, yielded no results. On networking platform Linked, his latest update, meanwhile, says he is "looking for opportunities".

Techcircle.com had first reported in April this year that the company is planning to rejig its business model and will be putting technology at the forefront of its operations. During that time one of the cofounders, Anurag Jain had also quit from the organisation.

In 2015, TruckMandi had raised under $2 million (Rs 13.3 crore) in pre-Series A funding from JustEat India founder Ritesh Dwivedy and other investors.

TruckMandi started out as an online platform where transporters could bid for trips while paying the company a commission on every booking. The company soon had leading business houses such as Jindal Stainless Steel, Fedders Lloyd, Bonn Biscuits, Pushp India, DHL Supply Chain and A-One Containers, amongst others, as its clients.

Over the past two years, several startups have entered the road transport sector seeking to bring changes in an industry notorious for the lack of transparency in deals, arbitrary rates, all-cash transactions and delayed deliveries.

Online truck aggregators such as TruckSuvidha, Porter, BlackBuck, GoGo Truck, FreightBazaar, Moovo, Turant Delivery and CargoExchange have been trying to bridge the gap among companies, warehouses, transporters and truck drivers to ensure on-time deliveries and optimum use of fleet capacity.

Truck Mandi's apparent shut down comes at a time when startups across sectors are reeling under a fund crunch as investors have turned cautious in placing bets on companies whose profitability is in doubts. In June Hyderabad-based truck aggregator TruckSumo.com had also suspended its services.

Over the past eight months, only two online truck aggregators—GoGo Truck and Dipper—have raised funding.