The key trends in the alternative asset management industry are all interrelated and represent a shift away from incumbent players reliant on largely analogue business models (i.e., those dependent on capital, people and specific locations) to a new set of digital disruptors. These disruptors will build their businesses from the ground up on cloud/mobile platforms, incorporating machine learning/artificial intelligence and Big Database technology, and offer rich, intuitive user experiences.

Big data will feed on itself and fundamentally change the way businesses work. As the number of of online transactions and interactions increases, the need to analyse the vast amounts of data created will become a diï¬€erentiator. Even though the ability to capture and store vast amounts of data has grown at an unprecedented rate, the technical capacity to aggregate and analyse these disparate volumes is only now catching up. For effective future prediction, data analysis using statistical and predictive modelling techniques may be applied to enhance and support the organization's business strategy. 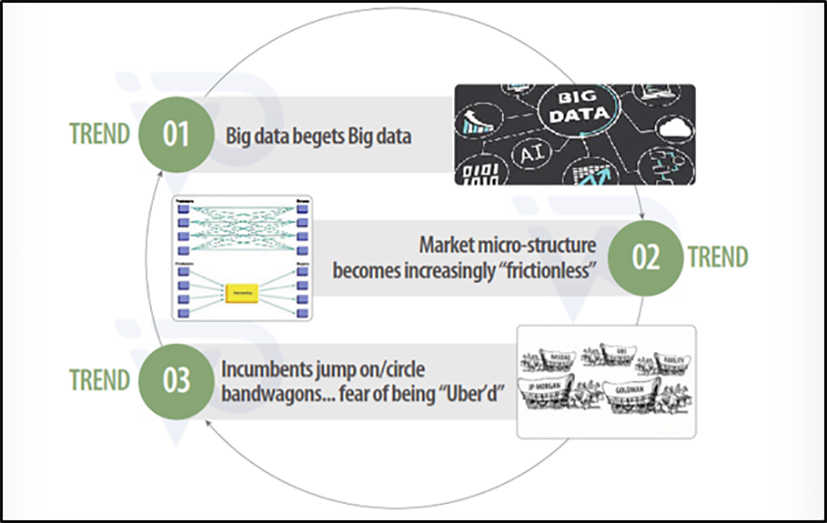 For alternative asset managers, this means cloud platforms will be an increasingly credible—and in many cases an economically compelling—way to support their investment operations, investor reporting and regulator ï¬ling requirements. For example, some market estimates have claimed that blockchain-like technologies could save investment banks alone over 30% of their spend on post-trade processes ($15 billion per year). The scope for other market participants such as investment managers would not be dissimilar. The power of big data could reshape the industry even further and render traditional asset management tasks obsolete.

Many banks will attempt to remodel themselves as technology companies, a la Goldman Sachs, in an attempt to conduct "capital lite" activities that are more reliant on a technological competitive advantage and less impacted by regulatory capital/balance sheet. Concerns about the safety of assets, along with those of operational and counter-party risk, have sparked increased interest from investment managers in integrated services across custody and prime brokerages. For example, UBS Prime Brokerage claims to have a return on assets twice as a high as some of its competitors by using technology to reduce its costs to serve hedge fund clients.

Those adapting quickly to technology could gain a competitive edge over the competition and build market share, while simultaneously reducing their operational costs.

Incumbents jump on to bandwagon

Traditional financial intermediaries are running "innovation labs", experimenting with Block Chain, buying ï¬ntech startups, hiring an increasing numbers of software engineers and data scientists. By taking such a 'portfolio' approach, they hope to either re-conï¬gure their traditional intermediation/middle-man role to ï¬t the new online paradigm or transform more completely into a ï¬ntech business with a ï¬nance arm attached. Time will tell whether such an approach will yield a viable long-term business or whether incumbent players will be held hostage to their legacy platforms for too long and lose business over time. For example, robo-advisory is a glib term thrown around that may have serious ramiï¬cations for the wealth management industry. It is entirely plausible that a generation tethered to their smartphones prefers a robo advisor to face-to-face contact with an investment professional.

The scope for disintermediation is very apparent where investors don't use a brick-and-mortar sort of carbon-based life phone like a financial advisor, and bypass that altogether. In the process, they put all of the information into a piece of software and a robo advisor comes up with an allocation specific for them, which is then monitored analytically on an ongoing basis.

This keeps the middleman out at all times, eliminating the fees associated. The millennial generation is already adopting this change, and it is likely to become the norm gradually.

As a consequence of these three trends, we will see the emergence of commercially viable digital businesses that have a sustainable economic advantage. They will not need to extract economic rents due to their privileged position as market intermediaries, providers of capital or holders of an asymmetric informational advantage. They will also not be held back by legacy platforms and processes.

Assuming regulators do not perceive them to pose a threat to data privacy or a systemic cyber security risk, these digital disruptors could survive and thrive.

Business models reliant on ï¬nancial intermediation such as banks, exchanges and brokers will all need to embrace (in many cases reluctantly) a host of new technologies such as P2P, Block Chain, AI and Big Data to stay competitive and relevant. Despite the likelihood of margin erosion, the hope for these incumbents will be to either improve proï¬tability by reducing servicing costs or to realise economies of scale by increasing transaction volumes (eï¬€ectively becoming utilities).

Nevertheless, the new wave of digital disruptors will be enough of a threat to provoke a permanent change in established business models and have a concomitant negative eï¬€ect on pricing and proï¬t margins.