There was a significant uptick in startup-related dealmaking activity as the month of May drew to a close, with the value of deals more than doubling to $92.03 million and volume increasing too after a subdued showing in the previous week.

In all, a total of 20 deals -- up from 13 last week -- were inked across stages and segments, with seed level (six deals) and consolidation (four deals) accounting for half of the volume.

The investments were spread across 14 diverse sectors including enterprise-tech, 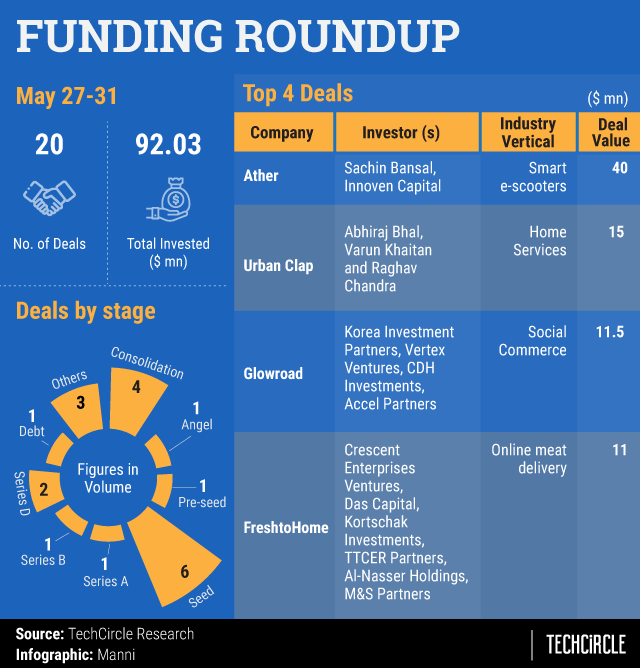 Flipkart co-founder Sachin Bansal led the round with $32 million in equity infusion while InnoVen Capital accounted for $8 million in venture debt.

Motorcycle major Hero MotoCorp Ltd, which had invested $19 million in Ather Energy in the form of compulsorily convertible debentures last year, has converted the debt into equity as part of this round, taking the total size of the round to more than $58 million.

The company will use the funds to ramp up production capacity and operations besides geographical expansion.

According to the company’s filings with the ministry of corporate affairs, the founders will contribute Rs 35.6 crore each as part of the infusion. The infusion will be over and above the $50 million Series D funding raised in November last year, which was led by Hong Kong-based hedge fund Steadview Capital and previous investor Vy Capital.

TechCircle had pegged UrbanClap’s valuation then at $445-450 million, up from the $165 million at which the company had raised its Series C round in 2017.

The capital will be leveraged to increase hiring across functions in the startup.

Airblack, a social commerce startup for travel, secured $1.5 million (Rs 10.4 crore) in a seed funding round from SAIF Partners. The New Delhi-based platform, which uses WhatsApp and Instagram to connect travellers with influencers, is currently in private-beta mode.

The seed round will be used for launching consumer products, ramping up the traveller community and hiring of the core team.

Airblack was started in February this year by Pulkit Pujara and Videt Jaiswal -- both were earlier a part of the investment team at SAIF Partners.

Freshtohome Foods Pvt. Ltd, which operates an online platform for ordering meat and fish, raised $11 million (Rs 76.4 crore) in a Series A round of funding led by UAE-based Crescent Enterprises Ventures.

Das Capital,  Kortschak Investments, TTCER Partners, Al-Nasser Holdings, M&S Partners and other investors based in Silicon Valley and Asia had also participated in the round. Kortschak had backed FreshToHome in the past while the rest are new investors.

Bengaluru-based FreshToHome  will leverage the fresh capital to further strengthen the sourcing supply chain by extending its patent-pending sourcing technology to fishermen and farmers across the country.

Mayank Bhangadia, co-founder and CEO of the venture, said that the latest infusion was part of a new fundraising exercise.

The development comes five months after the firm had raised $10 million in December last year from Tiger Global and Bertelsmann India.

TechCircle was the first to report that Happay, an expense management platform for enterprises, had secured $3 million (Rs 20.77 crore at current rates) in a fresh round of funding.

Bengaluru-based startup Zaasna Proptech Pvt. Ltd on Friday said it had raised seed funding worth Rs 2 crore ($290,000 at current exchange rate) from global investors in Singapore, West Asia and the US.

TechCircle was the first to report that Clairco, an Internet of Things-driven clean-tech solutions startup, had raised an undisclosed sum in a pre-seed funding round through investment syndication platform AngelList.

There were four consolidation-related deals in the last week of May. While some of them were buyouts, a couple of thes deal turned out to be acqui-hires.