Overall, technology startups raked in $337 million across 13 deals, a small improvement from the previous week in terms of dollars deployed.

Catch up with all the funding developments this week from India’s technology startup ecosystem.

Valuation bump up for Byju’s

Byju’s nearly hit the $6 billion valuation mark this week when Qatar Investment Authority, Qatar’s sovereign wealth fund, led a $150 million growth funding round in the company -- reported first by TechCircle. San Francisco-based venture capital firm Owl Ventures also joined the round, marking its debut in the Indian market. The last time Byju’s raised a mega funding round was in December last year when South African internet and media conglomerate Naspers led a $540 million round in the company. 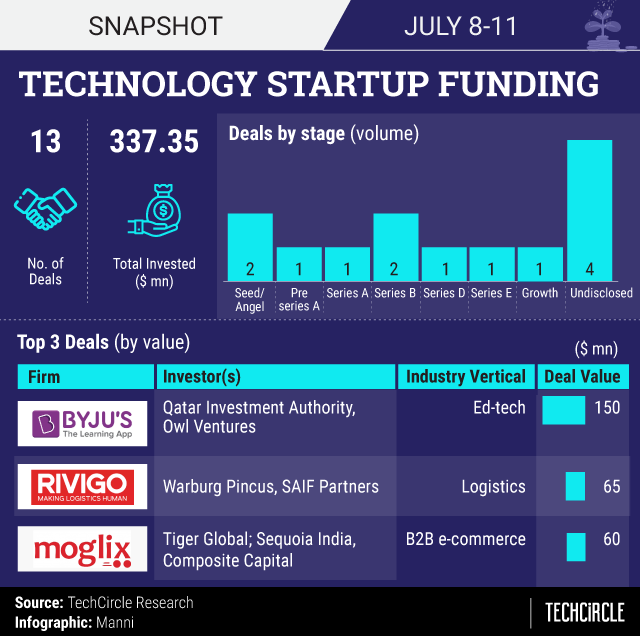 B2B platforms rake in the moolah

New York headquartered private equity firm Warburg Pincus and Delhi-based venture capital firm SAIF Partners led a $65 million funding round in logistics platform Rivigo Services Private Limited. The round forms part of the platform’s Series E round and will be used to strengthen its technology and network coverage, Rivigo said in a statement. Rivigo claims to have the largest network coverage in the country with more than 29,000 pincodes under the ambit of its delivery range.

Singapore-based Ezyhaul, another logistics and freight management platform, raised $16 million in its Series B round of funding. The identity of the investors was undisclosed. The Indian arm of Ezyhaul is operated by Mulura Logistics Private Limited and started operations in the subcontinent last year after successfully closing a $5 million Series A round of funding. The startup counts the likes of Coca-Cola, Reliance Industries, Exide Industries and DHL among its clients.

In its Series D funding round, Moglilabs Private Limited which operates industrial goods marketplace Moglix raised $60 million. Aside from Tiger Global, Sequoia Capital India and Hong-Kong based Composite Capital also participated in the round. The Noida-based platform procures industrial products and predominantly caters to the manufacturing sector, particularly automotive, metals, mining and FMCG.

Bengaluru-based fintech startup Finnew Solutions Private Limited which operates neo-banking services provider NiYO Solutions raised $35 million. The Series B round was led by Horizons Ventures and Chinese internet major Tencent Holdings, which has lately become a prolific investor in India. JS Capital also participated in the funding round. With this round, Tencent Holdings joins US-based venture capital firm Social Capital and the homegrown Prime Venture Partners, both of which had helped NiYO raise $14 million in a preceding funding round.

Early stage investor Blume Ventures helped primary healthcare services aggregator HealthAssure raise $2.5 million in its Series A round. With the conclusion of this round, the health-tech platform would have cumulatively raised $5 million.

VogueMe Technologies Private Limited which operates Toch raised an undisclosed sum in its pre-Series A round led by Hyderabad Angels, Mumbai Angels and a few other high net-worth individuals (HNIs). Toch harnesses artificial intelligence and deep learning technologies to enable the meta-tagging of objects, people, emotions, locations and other miscellaneous characteristics in real-time.

Four startups raised capital courtesy Samsung Venture Investment, a subsidiary of South Korean technology behemoth Samsung. Aloknath De, chief technology officer at Samsung’s R&D center in Bengaluru, said that the four investments are strategic in nature and that at least 100 more investments will be made by Samsung’s venture capital arm in the next four to five years. Investments to the tune of $8.5 million were made in the four startups -- systems app company Indus OS, speech recognition firm Gnani.ai, IoT solutions provider Silvan Labs and a fourth unnamed company.

Milkbasket, a micro-delivery startup, made its second acquisition. Bengaluru-based PSR Supply Chain was acquired in an undisclosed deal by Doorstep Retail Solutions Pvt. Ltd, the holding company of Milkbasket. The acquisition will bolster the company’s customer base and offerings in the city of Bengaluru, where it launched operations in January.