August got off on a slow note in terms of dollars deployed by investors in technology startups though deal volumes remained healthy. A total of $158.32 million (Rs 1120.05 crore at current rates) was invested across 17 deals in the opening week of the month against $446.06 million invested across 15 deals last week.

The funding deal charts during the week were dominated by two co-working startups, a segment that has lately seen a bit of slowdown in terms of funding activity.

Consolidation in the startup market was actually more interesting this week than funding activity. Among the five M&A deals that were struck this week, the one that stood out was the Reliance Industries arm Reliance Industrial Investments and Holdings’ acquisition of a majority stake in fashion marketplace Fynd. Also notable was Tiger Global-backed payment gateway startup Razorpay’s acquisition of Gurugram-based fraud prevention startup Thirdwatch for an undisclosed sum. Also, Times Internet owned restaurant reservation platform Dineout Services marked it fourth acquisition by snapping up Delhi-based Binge Digital, a foodtech platform that helps restaurants upsell and increase ticket sizes with the help of analytics and video menus. 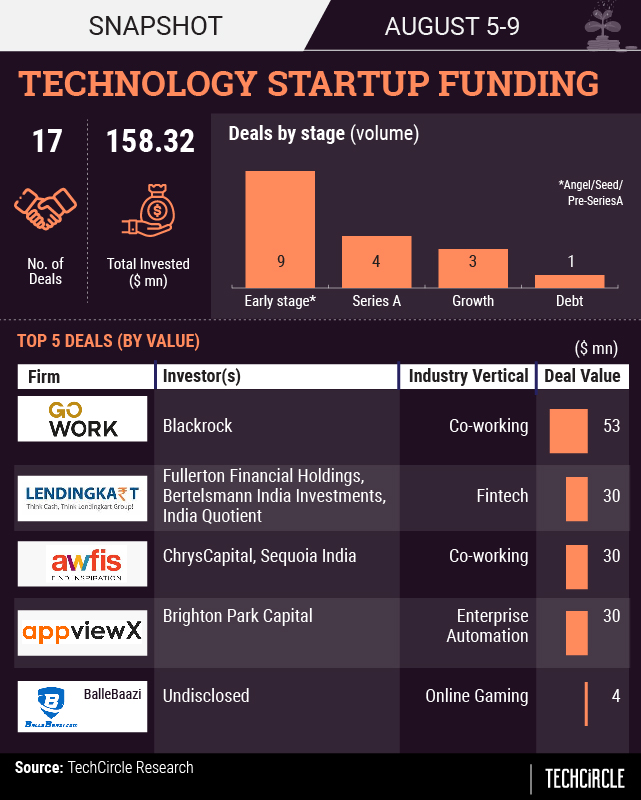 While India’s co-working startups did arrive on the scene with a lot of promise and potential, the sector hasn’t yet started raking in the moolah from investors.  The entry of global player WeWork in 2017 has also not made it easier for homegrown players.

A year after it scored a big ticket Series C round of 565 crore ($87 million then) Lendingkart Technologies, which runs an eponymous digital lending platform, raised $30 million as part of a fresh round of funding from its existing investors. Fullerton Financial Holdings Pte Ltd (“FFH”), Bertelsmann India Investments and India Quotient participated in the round.

Lendingkart, which has so far raised more than $184 million from investors through a mix of equity and debt, is one of the country’s most well funded digital lending startups.

Likewise, DailyHunt, the local language content and news aggregation platform, raised $2.98 million (Rs 21.15 crore at current exchange rates) from Goldman Sachs, an infusion that is likely part of a larger ongoing funding round. The company has been raising funds at regular intervals since December last year.

AppviewX gets $30mn Series A

AppViewX, which has operations across the US, UK and India, will invest in talent in India as part of its growth.

Online gaming startup BalleBaazi raised $4 million (around Rs 28.31 crore then) in a Series A round of funding led by two private equity funds whose identity the company did not disclose.

Indore- and Bangalore-based Agstack Technologies, which operates agritech platform Gramophone, raised Rs 24 crore ($3.38 million) in a Series-A round of funding.