Hiveloop Technology, the Bengaluru based company that owns B2B ecommerce platform Udaan, has raised $585 million in a growth funding round. New investors in the round include Tencent Holdings, Altimeter Capital, Footpath Ventures, Hillhouse Capital, GGV Capital and Citi Ventures.

The latest infusion takes the total capital raised by the company to $870 million.

Udaan’s existing investors Lightspeed Venture Partners and DST Global participated in the round, the company said in a statement. 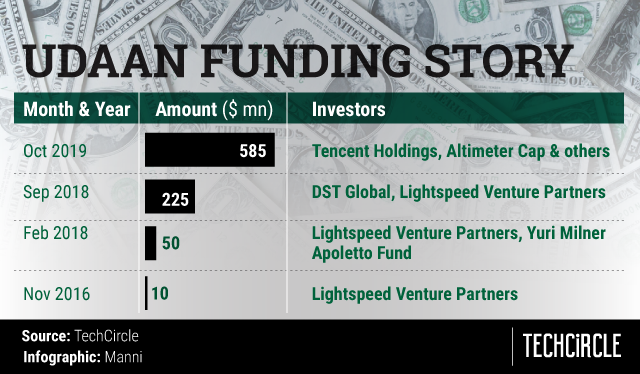 The company, founded in 2016 by former Flipkart executives Amod Malviya, Sujeet Kumar and Vaibhav Gupta, last raised $225 million in September last year as part of its Series C round. The round, according to multiple media reports, catapulted the company into the unicorn club. Unicorns are startups privately valued at $1 billion or more.

For Chinese technology conglomerate Tencent, Udaan is the second major deal in this market this week. On Tuesday, it joined Sequoia Capital India in a $25 million Series A funding round in Khatabook. “Udaan represents a powerful example of how technology can empower the business of small merchants, improve the efficiency of industries and bring benefits to consumers,” Tencent president Martin Lau said.

Following the latest capital infusion, Udaan plans to grow both existing and new categories on its marketplace. It operates across categories such as lifestyle, electronics, home and kitchen, staples, fruits and vegetables, FMCG, toys and general merchandise. It also plans to strengthen capabilities in areas such as payments, fulfilment delivery and financing for small and medium enterprises on the platform.

The addressable market that Udaan operates in consists of more than 100 million farmers, 15 million small manufacturers and over 30 million traders, retailers and service businesses, according to the company. It claims to currently connect 20,000 sellers across the country to 3 million retailers in 900 cities within its network.

“The market opportunity is turning out to be much deeper than we envisioned when Lightspeed led the company’s Series A financing in 2016,” Bejul Somaia, partner at Lightspeed Venture Partners, said.