Fundraising activity in the Indian technology startup ecosystem rallied to the second-highest weekly estimate, both in terms of the number of deals and value, since the Covid-19 pandemic shook the country.

The 126% rise in total deal size, versus a week ago, was majorly boosted by a $150 million round at application programming interface (API) testing and development platform Postman, which claimed a $2 billion post-money valuation following the infusion.

The week witnessed 17 deals of which nine raised a total of $200 million. The financial details of the others were not disclosed. On a sectoral analysis, the deals spread across a vast set of industries -- ecommerce, device repair solutions, foodtech, lifestyle, agritech, mobility, human resources, mediatech, Mediatech, healthtech, fintech, social media and gaming. 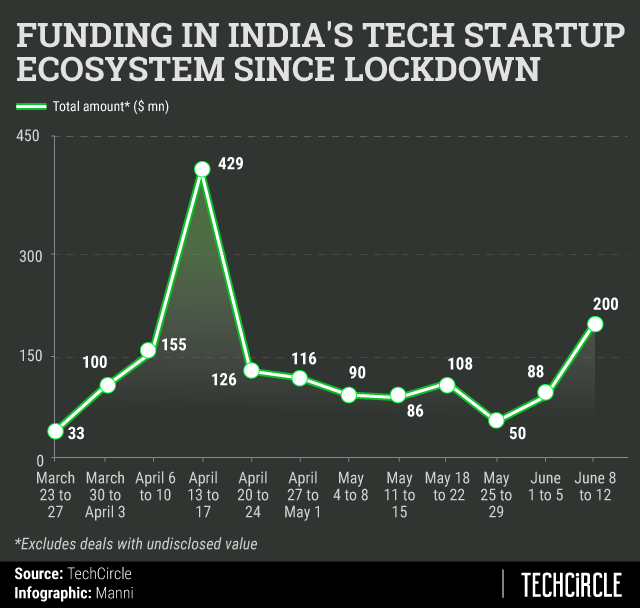 On a stage-based analysis of the investments, Series C and seed funding rounds led the pack, with four deals in each.

JIFFY.ai: The enterprise automation company raised $18 million in Series A funding round led by Nexus Venture Partners, to scale its product roadmap and expand team.

Yolobus: The intercity bus service provider raised $3.3 million in its Series A round of funding led by Nexus Venture Partners.

Rentomojo: The online furniture rental platform’s parent operator, Edunetwork, raised $2.97 million in an ongoing Series C round from Pratithi Investment Trust and others.

Arkam Ventures: Early stage venture capital firm Arkam Ventures announced the first close of its debut fund that has a corpus target of $92.5 million. Previously known as Unitary Helion, it has received commitments worth $43 million for the first close.