India ranks at the ninth spot in the list of top ten countries for climate tech investments since 2016, when the Paris Agreement was signed, a report released by London & Partners and Dealroom.co said, ahead of the 2021 UN Climate Change Conference.

According to the report, Indian climate tech firms have received $1 billion in venture capital funding from 2016 to date in 2021.

In fact, India ranks ninth in the list of top ten countries for climate tech investments since 2016, when the Paris Agreement was signed.

The bulk of the investments have gone to US and UK firms. 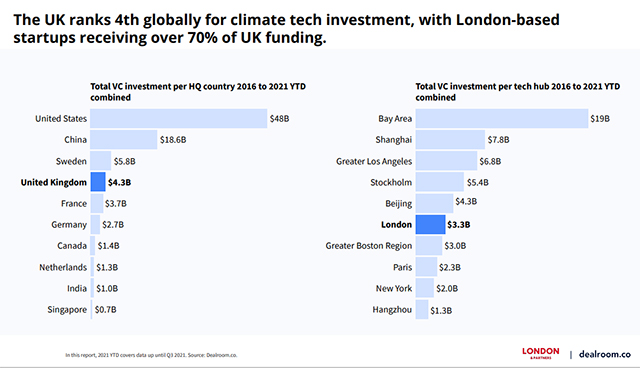 Singapore received investments worth $700 million in this duration.

“Countries around the world need to work together so that we can collectively change business practices and commit to net zero emissions. The global tech industry plays a pivotal role in accelerating this global transformation and this is demonstrated in the rapid growth of VC investment into global climate tech companies,” Hemin Bharucha, country director, India, London & Partners, said.

The report says that annual VC investments in global climate tech firms stands at $32.3 billion in 2021 to date, a fivefold increase from $6.6 billion in 2016.

2021 investment levels have already exceeded the whole of 2020 for global climate tech investment, the report said.

The report pegged Europe as the fastest-growing region globally for climate tech, with European VC investment into climate tech firms seven times higher this year than in 2016 (up from $1.1 billion in 2016 to $8 billion in 2021 YTD).

In Europe, London startups have raised $3.3 billion since 2016, and account for 16% of Europe’s total investment.   London has over 416 climate tech companies, the report said.