Gadgets at Work is a weekly section where we highlight gadgets and consumer products that can help simplify any executive’s life.

The Dyson Purifier Hot+Cool is the latest generation air purifier from the company, and follows up on the rather similarly named Dyson Pure generation of purifiers. While Dyson’s purifiers are mostly seen as home appliances, they’re often fitted in workplaces, co-working and retail locations as well.

On the face of things, there isn’t a whole lot for you to know exactly what Dyson has changed this year. The performance claims that the company makes are also incremental in nature – comparably better purification and lesser fan noise, and nothing more. So it’s more of an update than an upgrade.

In terms of looks, the Dyson Purifier Hot+Cool looks identical to its previous generation. This isn’t an entirely bad thing, since the cylindrical base and the capsule-shaped bladeless fan on top makes for a signature Dyson design that does not look dated yet. It fits seamlessly in your workplace, as it looks closer to a lifestyle product – rather than a cold and impersonal gadget.

The most noticeable improvement in the Dyson Purifier Hot+Cool over the Pure is in fan noise. Dyson claims 20 percent lesser noise with the Purifier generation of products, due to a new bladeless fan mechanism that reduces friction points between the ejected air and the machine. That doesn’t mean you won’t hear it when AQI levels are near hazardous, and a few decibels here and there barely makes a noticeable difference, but it still works. Air purifiers should blend into the background, and these definitely fit. 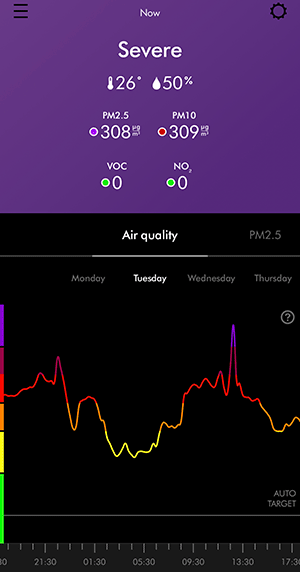 Further, Dyson has also claimed better purification, stating that the entire body of the Purifier Hot+Cool is now HEPA H13 certified. This means absolutely minimal leakage of impurities into your purified air. The Purifier is quite efficient at bringing down the PM2.5, PM10, VOC and NO2 levels in closed spaces. The fact that it can both heat and cool a room means you can at least offset some of the cost by eliminating some fans from your workplace. It won’t replace air conditioners for cooling though.

It works even more efficiently in closed spaces without a typical ceiling fan, taking less than half the time to bring the impurity levels down from ‘Poor’ to ‘Good’.

That said, the difference is still incremental against last year’s product. For the most part, the noise difference between the Dyson Purifier and the Pure at lower fan levels isn’t too stark. In your closed work cabins, the Pure is also effective in maintaining good air quality.

Other aspects, such as the physical remote and the companion app of the Dyson Purifier remain the same as before. The app is handy in switching between multiple Dyson products, and you can even control your air purifier at work while sitting at home, or set a timer to make sure that it does not stay on unnecessarily and waste electricity after you’ve left.

What’s worth noting here is that the Purifier and Pure consume immense amounts of electricity when in heater mode, while the cool mode costs you about as much as a regular fan. If you’re placing a host of these in your workplaces, the bottomline will look better if the heating mode is used judiciously.

Which brings us to its price. The Dyson Purifier Hot+Cool is still selling at its launch price of Rs 47,515, which will increase to Rs 55,900 once the offer period expires. We’re sure corporates or bulk orders can get special prices from Dyson’s stores though, so we’d recommend visiting one. In comparison, while the Pure Hot+Cool isn’t available on the Dyson India site, third party retailers are selling it at Rs 39,900.

If you have a small office setup and the pricing difference makes sense to your cost requirement, the Dyson Pure Hot+Cool is still an excellent option to consider. The Purifier Hot+Cool is for those who want to buy from directly from Dyson or want to have the company’s latest product only.