India is among the top 10 nations in the world in terms of technological advancements and funding in artificial intelligence, according to findings from a study published by The Brookings Institution. While India is outside the top 10 in terms of commercial and research initiatives in artificial intelligence (AI), it ranks sixth in terms of spending and investments on AI made by public, governmental initiatives, as well as private institutes and organisations.

The study notes that alongside having increasing adoption of new generation technologies, India is “well positioned from the funding standpoint” – a factor that gives it leverage to quickly achieve faster innovations in AI technologies, and overtake other nations that are leading AI achievements right now.

The other nations leading AI achievements ahead of India are USA, China, United Kingdom, France, Japan and Germany. Canada, South Korea and Italy are the other three nations behind India in the top 10 AI adopters list, as per the study. 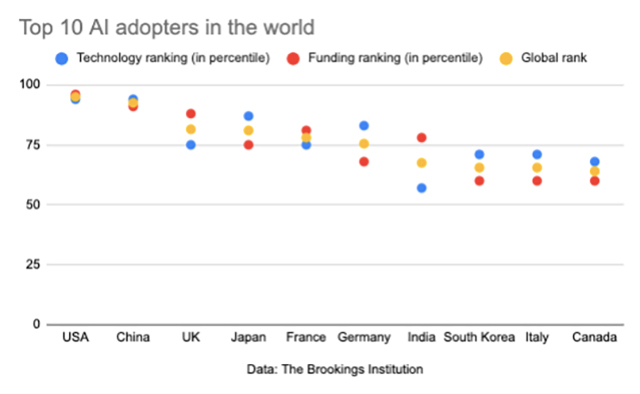 Breakdown of the state of AI adoption in global top 10

The study corroborates the fact that AI adoption across various sectors in India has been growing rapidly. A December 2021 report by McKinsey Analytics on the state of AI in 2021 found that India was the leading adopter of AI among emerging economies, from a commercial, business standpoint. Software services, product development and contact centre automation were among the key global industries adopting artificial intelligence.

Deloitte’s December 2021 report on the state of AI adoption in India, meanwhile, further broke down the adoption of AI in terms of industries in the country. The report noted that the Indian retail industry was the highest adopter of AI technologies and services, followed by telecom and fintech.

However, a previous chapter of the Brookings study also notes that the overall technological environment is not necessarily a mature one. “Among democratic countries, those with an immature technical environment are more likely to address ethics and governance, than those with a mature environment. We speculate that this reflects countries’ inexperience with these issues, thereby playing ‘catch up”.”

Citing an example of this, the study cites India’s 2018 AI Plan to state how the latter talks about the importance of public consent in anonymising data for AI models – something that AI plans in more mature countries have grown beyond.