“$300 billion of manufacturing and $120 billion of exports is a significant milestone that we’re setting out. We can, obviously, argue whether this is a base level target, but it is clear that digital adoption and consumption in India is far outpacing manufacturing of digital products in India,” said Rajeev Chandrashekhar. “It should be our endeavour to create enough momentum to bridge that and converge at some point down the road, where our consumption and production of digital products and services converge in terms of our ability to serve our own needs,” he added. 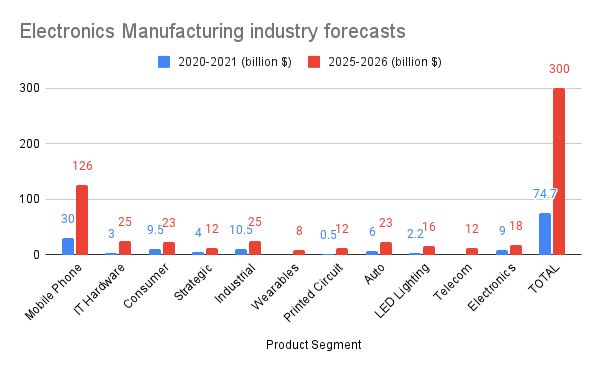 Further, IT Minister Vaishnaw addressed key points put in front of him by the industry. He said that the industry’s concerns around dual regulation from MeitY and Telecom Ministry will be addressed, adding that the “telecom department is not going to enter into mobile manufacturing at all”. “It will continue to remain the light touch regulation that is currently in place and that regime is not going to change,” he said.

He also said that discussions have taken place with the labour ministry to facilitate the functioning of large footprint factories that can hire 40,000 to 100,000 workers and more. He added that the government is also taking steps to create basic infrastructure for industrial zones, and has identified at least three locations where this can be done. He also asked the industry to help identify more locations where such industrial zones can be created. “Once we create one, I’m sure it’s possible that all other states will compete and will try to create similar zones,” he said.

“The primary short-term strategy must revolve around incentivization of scale in the next 1,000 days (2025-26). Increase in scale may set the stage for India to become a major value addition player subsequently. After the initial 1,000 days, incentivization of value addition may be prioritized,” the document states, and adds that India will not only have to attract global manufacturing players, but also create “Indian champions” who will add to its share in the global manufacturing space.

According to the Vision Document, India’s electronics manufacturing sector currently stands at between $67-74 billion, which means that it needs to quadruple in the next four years, imploring the government to cater to product segments that have “high potential” for scale in the industry. Other than mobile phones and IT hardware, in which the government has already announced production linked incentive (PLI) schemes, segments like wearables and hearables, LED lighting, and electronics components in electric vehicles (EVs) amongst these high potential sectors.

Lastly, as part of the government’s long term vision, the document states that the electronics manufacturing industry shift and develop sub-assemblies and component ecosystems to India, build scale and competitiveness, build a design ecosystem in the country, and remove disabilities from the sector steadily, while also nurturing Indian companies.