Will there be a Series A crunch in Europe?

The coming Series A crunch is perhaps the hottest topic of conversation in US tech circles at the moment and the numbers in the charts above show why. The number of seed deals has shot up whilst the number of Series A deals has stayed flat, ergo the percentage of seed deals that go on to raise Series A will fall, perhaps by as much as two thirds. People are predicting that as many as 1,000 angel invested companies will fail next year. 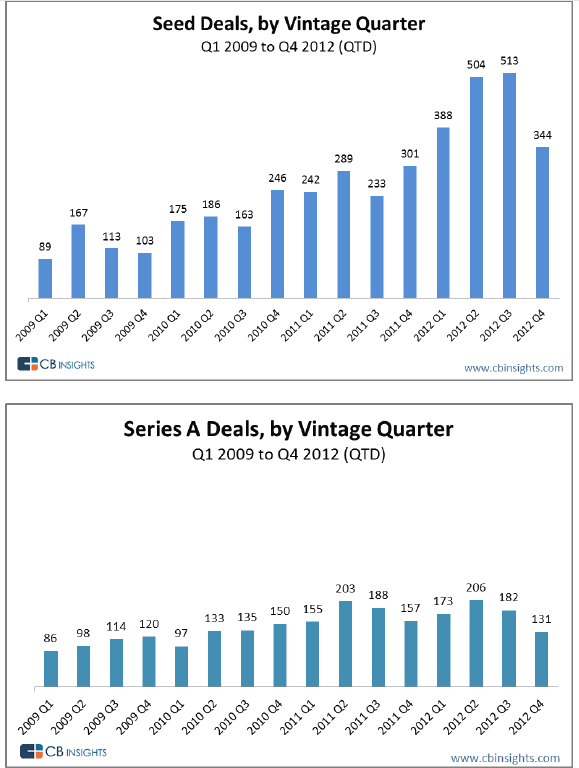 This data is from the US and I haven't found anything comparable for Europe so answering the question of whether or not we will have a Series A crunch here is more difficult. What we do know here is that the VC investments are roughly flat at c£1bn a year in the UK and maybe the same again around Europe, implying that Series A investments are also flat, as is the case in the US. So if there is to be a Series A crunch here it will be for the same reason as in the US; because the number of seed investments has ballooned.

In place of interrogating the data we can look to see if the factors that drove the increase in seed funding in the US are present here in Europe:

Looking at this root cause analysis you would conclude that the number of seed deals in Europe is likely to have increased a little, but not as much as in the US, and that fits with my qualitative feel for what's happening. Given that the overall market is underfunded in Europe then I don't think we are heading into a period when the Series A market is going to change radically. It has always been tough to get Series A funding and the competition for those VC dollars will most likely increase a bit but I don't think that most people will notice the difference.

(Nic Brisbourne is partner at DFJ Esprit, one of Europe's leading venture capital firms.  The post has been reproduced with the author's permission from his blog, The Equity Kicker.)