The session at Sequoia Capital India Advisors Pvt Ltd begins with a packed office. Shailesh Lakhani, managing director, Sequoia welcomes everyone in a room that oversaw a beautiful cityscape looking through a rain-tinted windowpane.

After settling down, the group quickly jumps into the topic, 'key metrics early-stage investors look at in a company,' where Lakhani kick-started by giving a quick summary about Sequoia and its portfolio companies. The investor has 60 companies in its portfolio managed by a team of 30 people.

For the next hour and a half, the discussion followed a question and answer format where Lakhani took time in clarifying everyone's query one by one.  For many, the session seemed to have broken many a popular beliefs and Lakhani said that there is nothing so established in terms of investments and it all depends on the opportunities, frugality and efficiency of the company.

He said companies need to be frugal in their growing stage. For example, he shared the experience of how one of his investee company based out of Pune, Druva Software Pvt Ltd, made it through in its business because of its frugality. He said the company's first set of product didn't succeed.

Second, he said that the companies looking for investments should develop a model that has efficiency in getting customers through word of mouth. The best company that Sequoia has invested had very little marketing expenses, where he was talking about Just Dial Pvt Ltd.

In terms of preferred industry, Sequoia has invested in technology, consumer, education, retail, and finance but it avoids real estate and infrastructure where there is a high government dependency.

Would they invest in a company that deals in a similar domain as their portfolio company? He said we stay away from repeating investments in same domain unless there is a product difference and we never fund two competitors.

The session took a quick break to distribute fresh Faasos (Sequioa-backed) among the participant and they are back again. 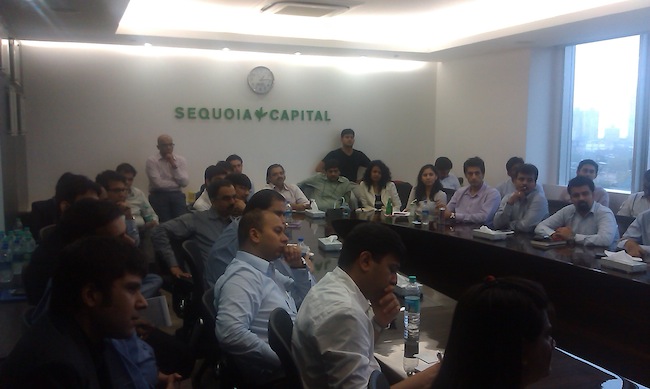 Even on their portfolio companies, the interaction of the investor is at the board level and not on a day-to-day basis. Though, the investor gets involved in product strategy level, but while building product per se.

On investments, it is important to take the bad with the good and true to its meaning, Lakhani recounted best investments and investment (without mentioning names) that taught some lessons on a same breadth. He said Mu Sigma as one of the best investments in the analytics space, at the same time, e-commerce investments has been `tough'.

He also spoke about food being a hot sector, but exit is a problem. Sequoia is also looking at opportunities in the new banking license space. On an average, he says that Sequioa meets 8 to 10 companies and get 5-6 mandates at any point of time.

As a word of caution, he also said that for angel investments, the promoter should keep the equity dilution at less than 25 percent, otherwise future funding becomes a problem.

Post the interaction, we moved to our next location, which was the office of Orios Venture Partnersâ€¦. stay tuned for more on that. You can also read about our other Pit Stops Quikr, Olacabs and Nexus Venture Partners here, here and here.