India will have 185M mobile internet users by June 2014: IAMAI

The number of mobile internet users is going to reach 155 million in India by the end of March 2014, and 185 million by June, maintaining a quarter-on-quarter (Q-o-Q) growth of 20 per cent, according to a report released by the Internet and Mobile Association of India (IAMAI) and market research firm IMRB International. The report further mentions that this number was 130 million as of the end of last month, and 110 million as of October 2013, of which 85 million users were from urban India and the rest from rural India.

Interestingly, across both urban and rural India, over 50 per cent of the active internet users are accessing internet on their mobile, apart from other sources, indicating that there has been a huge uptake in consumption of the mobile internet medium.

The average revenue per user (ARPU) has dropped around 16 per cent to Rs 387 from Rs 460 in 2012. However, the 'percentage amount' spent on mobile internet has gone up to 45 per cent from 43 per cent in the same year, indicating that more and more people prefer communicating over the mobile phone. 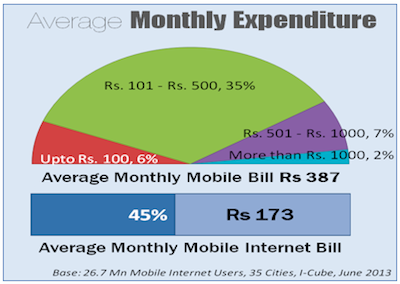 Handset prices in the country

The report also finds that the median price of a handset had fallen 15 per cent from Rs 8,250 in 2012 to Rs 7,000 in 2013. This was attributed to the reducing prices of phones with advanced features, and the fact that more and more manufacturers are trying to target the 'Value for Money' segment by offering more features at lower prices. 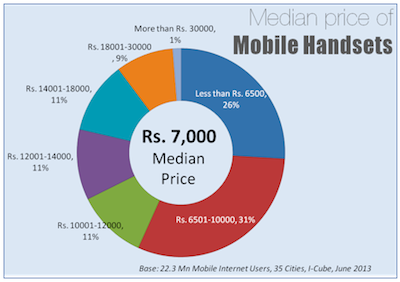 While we do not have current figures for the same, according to the Telecom Regulatory Authority of India (TRAI), as of October last year, there were 875.48 million wireless telecom subscribers in India. During the same time, there were around 110 million mobile internet users in the country. What this basically means is that only about 13 per cent of the total number of telecom subscribers were actually accessing internet via their mobile phones. Hence, while the estimated 185 million number is impressive, the mobile internet penetration in the country will still remain low (considering the number of telecom subscribers will also increase in the Jan-July 2014 time period).