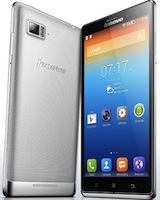 After starting off the year by launching IdeaPad A10, its first dual-mode laptop running on the Android operating system, Lenovo has now launched the Vibe Z phablet in the Indian market. Unveiled in China late last year, the device was also showcased at the Consumer Electronics Show (CES) 2014 in Jan 2014. While the IdeaPad A10 was priced at Rs 19,990, the new device is available for purchase for Rs 35,999. Here is a look at the specifications of the device.

The newest member of Lenovo's premium mobile phone portfolio has a 5.5 inch full HD IPS capacitive touchscreen display (1920Ã—1080 pixel resolution) with 400 ppi pixel density. It is powered by a 2.2 GHz quad-core Qualcomm Snapdragon 800 processor and has 2GB of RAM. The device runs on the Android 4.3 Jelly Bean operating system and its internal memory is 16 GB (not expandable).

On the camera front, this one has a 13 mega pixel autofocus rear camera with LED Flash that can also record full high definition videos (1080p) at 30 frames per second and a 5 MP front facing camera for video calling and high-quality self-portraits. In terms of connectivity, the device has Wi-Fi (with Wi-Fi hotspot), Bluetooth 4.0, 3G, and 4G LTE, as well as a microUSB port.

The dimension of the device are 149.1mm x 77mm x 7.9mm and its weight is 145.2 gm. The phablet also has GPS (with A-GPS support), FM Radio, and it is available in silver and titanium colours. The company has provided a 3,000 mAh battery in the device, which it claims will provide up to 33 hours of talk time and 648 hours of stand by time.

In addition, Vibe Z comes preloaded with a number of applications / games that include Evernote, Asphalt 7, Real Football 2014, Green Farm 3, and UC Browser, among others. Lenovo has also provided a new DOit series of apps that include SHAREit- share photos, apps, video and other data with any compatible device, off network; SECUREit- protects the phone from viruses, spam and malware; SYNCit- enables users to backup or restore their contacts, message data and call logs; SNAPit- offers multiple photo shooting modes; and SEEit- allows users to edit and organise their photos.

Prior to this, Lenovo had launched Vibe X, the slimmest device from the company till date in the Indian handset market. The smartphone runs on the Android operating system and is available for a price of Rs 25,999.

Last month, the Lenovo Group also agreed to buy Google Inc's Motorola handset division for $2.91 billion, in what was China's largest-ever tech deal. Google had earlier acquired Motorola Mobility for $12.5 billion in May 2012.