PlexusMD gets funding from Patni scion, others 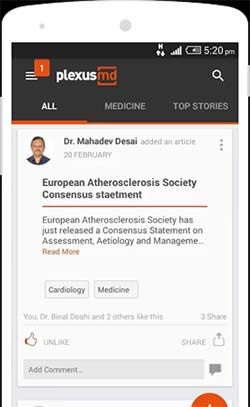 An email to a PlexusMD spokesperson didn't elicit any response till the time of filing this article.

PlexusMD, operated by Plexus Professionals Network Pvt Ltd, was founded by IIM alumni Rohan Desai and Binal Doshi along with Kinnar Shah. It provides a platform for exchange of news, information and research in medicine. The company focuses on job vacancies for medical professionals. It also helps users connect with other professionals and organisations to know more about relevant courses and career opportunities.

The company competes with other social networking ventures for medical professionals such as Curofy and DocPlexus. Both DocPlexus and Curofy had raised VC funding in October 2015. While DocPlexus secured about $700,000 in seed funding from Uniqorn Ventures and Austria-based ASP Consulting, Gurgaon-based doctors networking app Curofy raised an undisclosed amount in pre-Series A funding from US venture capital firm RoundGlass Partners.

Arihant is the son of Gajendra Patni, one of four Patni brothers who started Patni Computers and later sold it to IGATE. Arihant has been active in tech startup investments in India along with his brother Amit.