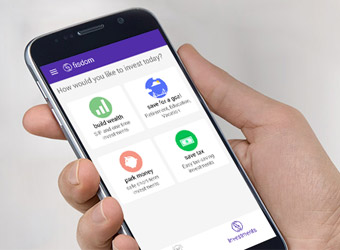 The company will invest these funds in technology, to expand its team and acquire customers, it said in a statement.

Fisdom was founded by Subramanya SV, Ramganesh Iyer and Anand Dalmia in September 2015. Subramanya was previously managing director at venture capital firm Bessemer Venture Partners and is also an angel investor. He has invested in startups such as DailyNinja, Cartisan and Goodbox.

Iyer was an investment manager with Peepul Capital Advisors and Dalmia worked with Macquarie Capital India before starting Fisdom.

"Traditional wealth managers have mostly targeted elite customers, leaving the vast majority of the population unserved. We see a huge potential and opportunity with the growing usage of smartphones and Internet in Tier 2 and Tier 3 cities," said Subramanya in a statement.

Subramanya told TechCircle the company plans to add 10 employees to its team of 25 people by the end of this year.

Saama Capital co-founder Ash Lilani said Fisdom is a "unique and innovative product" and has a lot of potential.

Other online investment platforms include Tauro Wealth and Scripbox. Tauro received seed funding from TracxnLabs and angel investors while Scripbox raised its Series B round of funding led by Omidyar Network earlier this year.