From rummy to e-sports, it's boom time for digital gaming in India

Fantasy sports platform Dream11 vaulted into the big league of local mobile gaming startups in September when it raised $100 million in a Series D round of funding led by Tencent Holdings, China’s biggest gaming and social media company.

The development not only provided a fillip to the entire Indian gaming market but also boosted the morale of local entrepreneurs, who are now trying to tap new business opportunities in a sector which has multiple sub-segments.

The business of gaming has grown substantially in India over the past few years after overcoming a phase of self-doubt and investor apathy. Behemoths like Alibaba-backed Paytm and Tencent are now poised to pump in large sums, with estimates suggesting that India's mobile gaming market will be worth $1.1 billion by 2020 and comprise around 628 million local users.

One of the top five countries for mobile gaming in the world, the Indian industry is already worth more than $890 million. 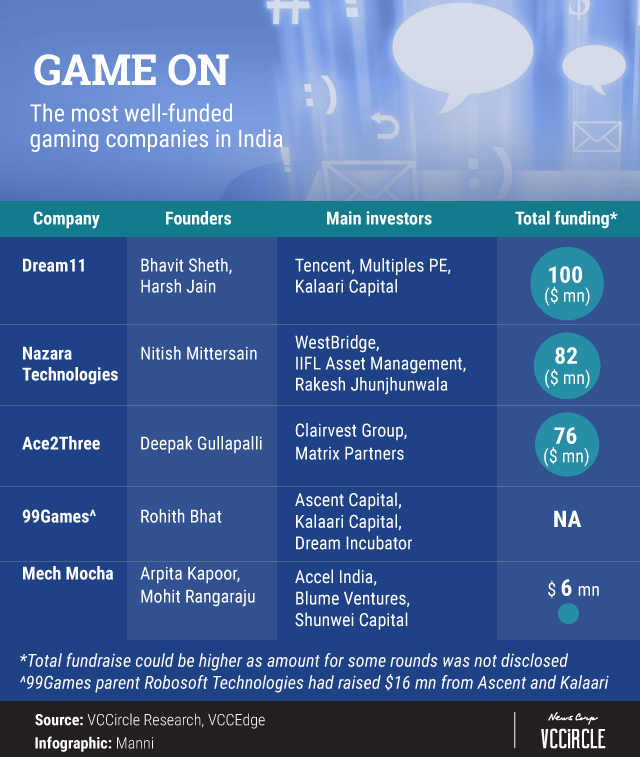 The rise of digital gaming’s popularity in India is largely owing to the widespread use of smartphones in the last ten years. Many game developers are capitalising on the growth in smartphone usage to build their businesses. In turn, games have emerged as the key driver of mobile app growth globally.

In addition, while the price and accessibility of mobile data were once stumbling blocks, tariff wars between telecom operators over the past couple of years has made the commodity much cheaper in India.

“In 2010, we had 20-30 million gamers; today we have 250 million in India,” Manish Agarwal, chief executive officer of mobile games developer Nazara Technologies, told TechCircle. “The infrastructure, devices and payment options have all fallen into place for gaming companies.”

Mumbai-based Nazara is on course to become the first Indian gaming firm to go public after receiving regulatory approval earlier this year to launch an initial public offering (IPO). The success of players such as Nazara and Dream11 amid the growing popularity of mobile games has also made investors optimistic about the prospects of the sector in India.

“Gaming has been a large sector for quite some time but the pace of growth has increased significantly over the last 18 months primarily because of digital transformation in the country,” said Revant Bhate, partner at Kstart, the seed fund of VC firm Kalaari Capital.

“It’s an exciting sector which has scope for multiple players who are trying to cater to the needs of an entirely new audience which is coming on to the internet today,” he added.

Digital gaming firms broadly operate under three genres — e-sports, where professional gamers participate in tournaments of games like Counter-Strike and FIFA; mobile-centric and casual games such as Candy Crush and Temple Run; and the casino genre where real money changes hands.

“Within the real-money genre, there are four verticals — rummy is the largest, then comes poker, daily fantasy and quizzing,” said Mohit Agarwal, co-founder and chief executive officer of online poker site adda52.

“The local real-money gaming industry is hitting annual revenues in the ballpark of Rs 1,000-1,200 crore,” Agarwal of adda52 added. “The number of users is much higher in free games but revenue per user in real-money games is very strong. Competitive games worldwide bring money and increase ARPU (average revenue per user).”

However, there are some legal question marks over such games. For instance, some say poker and rummy are akin to gambling while others view them as games of skill. Litigations in this regard are pending at various forums.

“Betting and gambling are subjects on which each state is free to make its own laws, leading to a considerable divergence between state-specific gaming laws,” said Sajai Singh, partner at law firm J Sagar Associates.

For instance, adda52 says that owing to “peculiar wording” of gaming legislations in Gujarat, Assam, Odisha, Nagaland, Sikkim and Telangana, it does not permit residents of these states to play real-money poker.

Singh added that the laws are ambiguous in their applicability to the online sphere.

Fantasy sports have also had their brush with the law. But Dream11 and others in the space received a shot in the arm last year when the Punjab and Haryana high court observed that fantasy games cannot be considered gambling as they require considerable skill and judgment.

Tencent’s big bet on Dream11 brought fantasy sports, another sub-genre of real-money games, into the limelight in India. Dream11 currently has a 90% share of the local market.

“In the US, 70% of sports fans play fantasy sports,” said Harsh Jain, chief executive officer of Dream11. “So if we take that as a benchmark, then in India, we should have 210 million users playing fantasy sports today, but there are only 43 million as of now. That gap is something where opportunities continue to lie.”

In fantasy sports, users create virtual teams comprising real-life players and organise a match based on statistical performances of those players in actual games.

According to a joint report by Indian Federation of Sports Gaming (IFSG) and market research firm AC Nielsen, close to 100 million Indians will play fantasy sport by 2019. Dream11’s Jain is also the chairman of IFSG.

E-sports is another flourishing segment of digital gaming. According to a research by market research firm Newzoo, the global e-sports market had grown to $748 million in recent years and was expected to grow to $1.2 billion in 2018. E-sports was even trialled at this year’s Asian Games in Indonesia.

Research by Frost and Sullivan indicated that the Indian e-sports audience is currently very nascent with an estimated 2 million enthusiasts and 2 million occasional viewers. However, this is expected to grow more than fivefold by 2021.

Nazara is trying to capitalise on the growing enthusiasm for e-sports. In January this year, it acquired a majority 55% stake in Gurgaon-based e-sports platform NODWIN Gaming.

But Nazara’s bread and butter is casual gaming. It is primarily engaged in acquiring mobile games across emerging markets.

As of September last year, Nazara catered to 130.43 million monthly visitors from 61 countries across emerging markets, besides having more than 4.08 million paid users subscribed to its services. It also has freemium offerings. Nazara’s subsidiary Next Wave Multimedia owns the most popular mobile cricket game franchise, World Cricket Championship.

Some big names are also getting in on the action.

Also, Tencent is planning to invest up to $200 million (Rs 1,300 crore) in its India gaming business in the first year and aims to own at least a third of India's gaming user base in two years, TechCircle reported in March. It will mostly focus on casual mobile games.

Indian companies in the digital gaming space are hoping to reach the heights of foreign counterparts such as listed Angry Birds creator Rovio Entertainment and Candy Crush creator King Digital Entertainment, which was bought by Activision for $5.9 billion in 2015.

A number of Indian gaming firms have raised venture capital money over the past year.

Kstart’s Bhate believes that investor interest will keep growing as the number of players continues to increase, leading to the possibility of a larger revenue base and promising outcomes.

“Any investor who is investing now is looking at a exit horizon of 2012. By then, you would see 850 million internet users in India out of which 400-plus million would be transacting online including paying on gaming platforms, hence giving comfort on the size of the market,” he said.

Bhate believes that there is scope to create more verticals of gaming for specific geographies, languages, and communities as each of these segments have a different appeal.

Tech giant Google has sensed an opportunity too. In June, it launched an accelerator programme for gaming startups and developers in Asia.

“People want to acquire a pie of this industry as they’re waking up to the fact that large valuations are possible," said Agarwal of adda52.