Despite big Q1 wins, growth may slow down for Indian IT services firms this fiscal

Despite significant deal wins across sectors, including from the important BFSI (banking and financial services) sector, during the first quarter of the current financial year, the growth outlook for the domestic information technology (IT) sector through the rest of the year doesn’t look particularly optimistic, according to several market analysts tracking the sector’s performance.

By now, most IT services firms have reported their earnings for the first quarter of 2019-2020 and barring Bengaluru-based Infosys, nearly every firm has reported pressures on sales and margins. Even Chennai and New Jersey based Cognizant, which met analysts expectations in terms of growth, reported an underwhelming performance with respect to the BFSI and healthcare verticals. 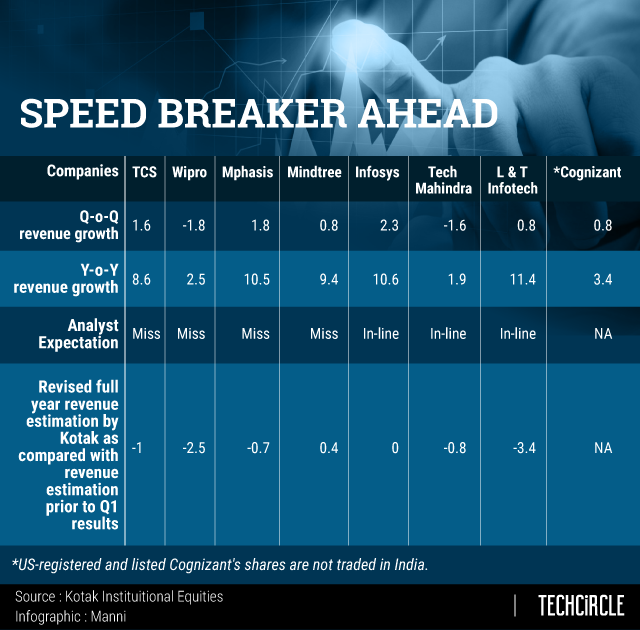 Analysts expect factors such as the looming global economic slowdown, ongoing trade wars being waged by the US government and, the recent interest rate cut by the Federal Reserve Bank to weigh down on the growth of the IT services sector. The interest rate cut, in particular, casts a shadow over the BFSI sector which accounts for more than one-third of the IT services sector’s revenues.

"With looming trade wars, weak BFSI, longer sales cycle, it is very likely that this year will be slower than last year. And that is putting more pressure on margins. Even Infosys’ growth has come at the cost of margins. It cannot be both," said Harit Shah, IT analyst at Mumbai based stock broking firm Reliance Securities.

Large deal wins and recoveries from the BFSI sector during the first quarter were expected to deliver the much-needed growth momentum through the rest of the year.

"The recovery of the BFSI sector was important in the interest of better growth prospects. The vertical is looking at potential headwinds for the rest of the fiscal year and it is difficult to tide over with growth from other verticals. The trade war will also have an impact on the manufacturing sector," said Sanjeev Hota, vice president and head of research at Mumbai-based stock broking firm Sharekhan.

While market leaders Infosys and Mumbai-based TCS remained stable with their toplines growing at 12.4% and 10.6% respectively during the first quarter, growth could plateau in the second half of the financial year, according to a quarterly sector report from Kotak Institutional Equities.

"Revenue growth was impacted by moderation in spending of clients with exposure to capital markets and select European banks. Weakness in the capital markets segment, soft spends in US regional banks undergoing mergers and acquisitions, and an overall slowdown in BFS spends accentuate weak outlook for the vertical," the brokerage firm said in its reports.

The growth challenges facing the IT services sector have been an ongoing problem for the past couple of years. More recently, the tightening of the H1-B visa regime under US president Donald Trump has increased costs and forced companies to hire expensive talent locally. Infosys, for example, has hired more than 10,000 employees in the last two years since the visa related problems started.

"There is a structural slowdown in the sector over and above the local hiring and visa issues. The cost of doing business has gone up. The business is transforming rapidly. Legacy services still contribute to 65% of the industry’s revenues, which is on a constant downhill. The digital piece is still around 30% and the growth, while healthy, has only been incremental. Digital deals are smaller and hence the customer acquisition cost is also going up," Sharekhan’s Hota said.

Mid-tier firms such as, Cyient and Persistent Systems  have also experienced a slowdown in terms of revenue growth year-on-year. While Persistent saw a 0.2% decline, Cyient reported a 2.6% fall in constant currency growth on a year-on-year basis. On a sequential basis, in constant currency, the top five Tier 2 IT services firms saw a growth of 0.3% despite currency tailwinds.

Among the larger IT services firms, both Mumbai-based Tech Mahindra and Bengaluru-based Wipro saw a sequential decline of 1.6% and 1.8% respectively. The slowdown can be attributed to the slump in growth from large clients and client-specific challenges for some companies, according to analysts. The muted growth rates should be seen in the context of the 8% growth that the industry achieved in the last fiscal. Infosys and TCS are expecting a growth rate of 9% in the current fiscal. Traditionally, growth in the third quarter, October-December, has been muted for most IT services firms due to extended holidays in the western markets.

There is, however, a silver lining. Most of the top tier firms have reported a steady flow of contract wins during the first quarter, across sectors. "While it seems like a bad quarter, most of the companies had specific issues like in the case of Cognizant, Larsen and Toubro Infotech, Wipro and Cyient. That should not affect the overall outlook. The stable companies like Infosys and TCS are doing better," Reliance Securities’ Shah said.

According to the Kotak report, the total contract value of deal wins has been strong across all companies, reflecting a stable demand environment even though it was not a reliable indicator of growth. "Despite the multiple headwinds, deal wins have increased on y-o-y basis across companies. While there is a lack of clarity on renewals of the existing business, TCV is a good indicator for momentum in wins," the report said adding that the indicator gives some comfort for the sector.