The ongoing slowdown in the banking, financial services and insurance (BFSI) sector, as well as the downtrend in the retail vertical, has finally caught up with India’s $190 billion information technology (IT) services industry. While the country’s big four homegrown IT services firms all saw their earnings for the third quarter of the current financial year under pressure on account of those factors, Mumbai-based Tata Consultancy Services (TCS) took the hardest knock on growth.

Traditionally, the BFSI sector has been the revenue mainstay for the IT services industry here. Among the big four homegrown firms, TCS, Infosys and Wipro generated 30.4%, 31.5%% and 30.9%% of their revenues, respectively, from the BFSI sector in Q3 of financial year 2019-2020 (FY20).

Noida headquartered HCL Technologies generated 21% of its revenues from BFSI. The Shiv Nadar promoted firm has traditionally had a lower reliance on the sector. 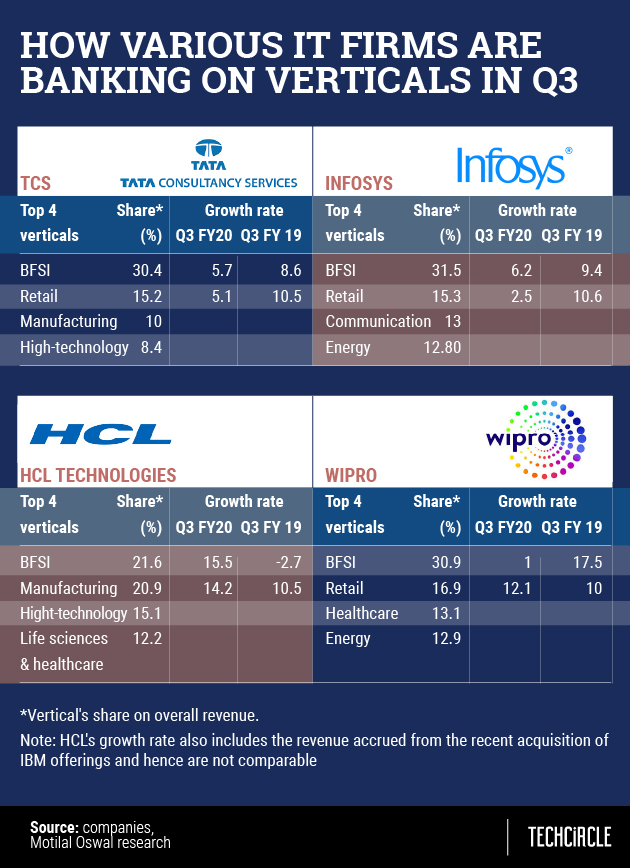 TCS' growth during the quarter was the slowest in eight quarters. The Tata Group-promoted firm, and also the country’s largest IT services exporter, reported single-digit growth in two consecutive quarters, somewhat unusual for the $21 billion firm.

After remaining at double-digit growth rates for around two years, Bengaluru-based Wipro saw its BFSI revenue growth decelerate sharply to 1% year-on-year. The firm’s overall revenues grew less than 3% during the quarter.

Bengaluru-based Infosys saw its revenues from the BFSI sector slower at 6.2% though overall revenue growth was aided by its focus on other verticals.

Ironically, TCS, which saw overall revenue growth hit hardest, actually made market share gains in the BFSI sector compared to peers. The BFSI growth rate at 5.3% was higher than others barring Infosys in the vertical, with Wipro’s growth at a measly 1%. However, while Infosys reported double-digit growth in five out of the eight verticals in which it has a presence -- communications, manufacturing, high-technology, life sciences and others  -- TCS saw double-digit growth in only one -- life sciences and healthcare -- of its seven verticals.

"BFSI is soft across all companies and because of the heavier weightage of the vertical. The road to recovery is expected to take longer with poor visibility on BFSI spends over the next one year," Sanjeev Hota, vice president and head of research at brokerage firm Sharekhan told TechCircle.

Hota added that with the US-China trade deal, the retail vertical could bounce back in FY21, which could help IT services firms to compensate for the slower BFSI growth. Retail contributes to around 15% of revenues for both TCS and Infosys and the growth rate has been 5.1% and 2.5% respectively.

"The commentary from the companies has been that the customers now want more for less, which means they want more work to be carried out for lesser deal value with renegotiation of existing contracts happening with several customers. TCS has suffered from revenue leakage in existing or continuing deals," Hota added.

However, the upcoming US elections and a change in policies or tax regulations could affect customer spends in technology, the companies said in various analyst calls.

The third quarter did have a silver lining. All four firms reported an average growth rate of 20-30% in digital revenues.

Some of this includes their existing business moving to digital in line with changing customer requirements. Therefore, the growth rate is not necessarily an indication of the topline growth at these firms, analysts said.

"Infosys has been aggressive on digital and the investments over the last couple of years have paid off. The shift from the core or traditional services towards digital for the company's customers has been more rapid than for others. It has also been willing to work on lower margins as they tend to compete with smaller firms in the digital domain," said Harit Shah, IT analyst at Mumbai-based brokerage firm Reliance Securities.

Pradeep Mukherji, president of consulting firm Avasant, said that Infosys has been marketing savvy and the company has moved fast on digital while it started making huge investments in the domain only in the past two years.

"The firms are reducing the dependence on people and are more driven by technologies such as machine learning and automation. This will deliver better margins in the medium to long-term offsetting the higher hiring in the US. The productivity has been improving owing to the agile method," Mukherji added.