A string of big-ticket transactions propelled the value of deals past the $350-million mark in the third week of June. This marked a seven-fold increase over the previous week, even though the number of deals was nearly the same.

Three sectors -- enterprise technology, fintech and urban mobility -- accounted for nearly 92% of the deal value. A couple of late- and growth-stage deals also boosted the overall value of funding. 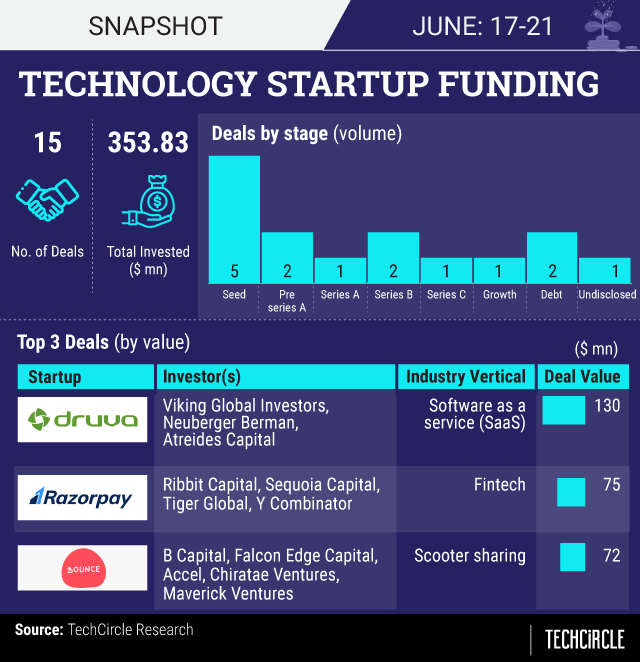 Druva and Postmaster, both ventures in the enterprise-technology domain, raised a combined $180 million -- more than half the total funding secured by Indian startups this week. Nexus Venture Partners was a part of both transactions.

US and India-based cloud data backup and recovery firm Druva Inc raised $130 million (around Rs 902.5 crore) in a funding round led by Viking Global Investors.

The funding round puts the Sunnyvale-based company’s valuation north of $1 billion, making it the only second software-as-a-service (SaaS) company to achieve the coveted unicorn status in India after Chennai-headquartered Freshworks.

Neuberger Berman and Atreides Capital are the two other new investors taking part in this round while existing investors including Riverwood Capital, Tenaya Capital and Nexus have also contributed. Founded in 2008, the company delivers data protection and management for the cloud.

US and India-based application programming interface testing and development platform Postman raised $50 million (around Rs 348 crore) in a Series B round of funding led by US-based venture capital firm Charles River Ventures (CRV). Its existing investor Nexus Venture Partners has also participated in the funding round.

Postman is platform that is used to build connected software via APIs.

Razorpay leads the way for fintech

Bounce, a dockless scooter- and bicycle-sharing platform, announced a Series C round of funding worth $72 million (Rs 504 crore).

On Friday, Mint reported that Vogo was in talks to raise another $40-50 million.

Fintech and the native-language content segment were in the limelight in connection with consolidation.

Dailyhunt acquired fellow content platform LocalPlay to ramp up its hyperlocal presence and to augment its offerings to core users who live in Tier-2 cities and beyond.