The first week of July was pale compared to the first few days of June, which had seen the extension of the bull run seen in late May .

Nevertheless, investor sentiment was not completely disappointing as Softbank pumped in a quarter of a billion dollars into the Ratan Tata-backed electric vehicles arm of Ola.

Go-Jek, the Indonesian counterpart to Ola and a ride-hailing unicorn, invested $5 million in Rebel Foods. 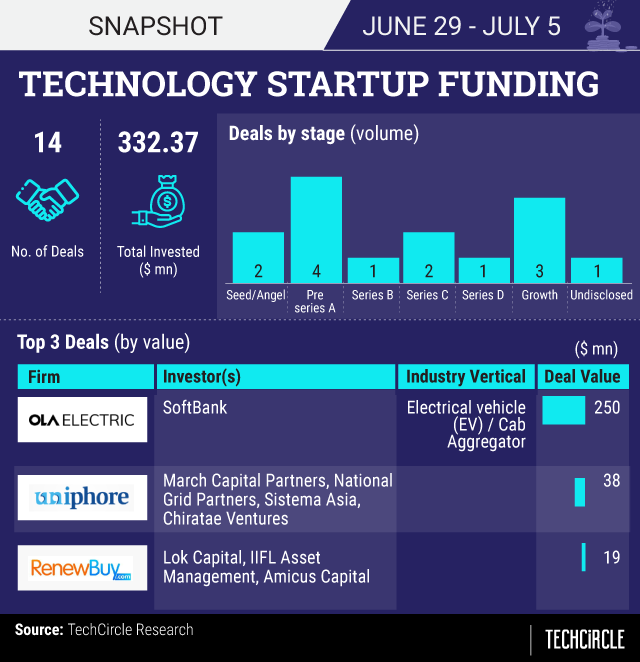 Uniphore, a software recognition platform, raised just under $40 million in its Series- C round of funding.

Ola Electric Mobility Pvt Ltd, a unit of ride-hailing platform Ola, raised $250 million (around Rs. 1,725 crore) from SoftBank. As per TechCircle estimates, Ola Electric’s valuation rose three times to nearly $960 million, just shy of a unicorn valuation. The electric mobility company, which was made a separate entity in April 2018 by ANI Technologies Pvt Ltd, last garnered funding in March in a round led by Tiger Global Management and Matrix Partners India.

Rebel Foods, which operates cloud kitchens platform Faaso's raised $5 million from Indonesia-based ride-hailing unicorn Go-Jek. The fund injection is part of the cloud kitchen's Series-D round. The investment was made through Go Ventures, the ride-hailing platform's venture investment arm.

Another player in the food-tech sector, Daalchini Technologies, raised $500,000 (around Rs. 3.5 crore) in a seed round led by early-stage venture capital firm Artha Venture Fund. The startup said it will harness the funds to expand its product offerings, improve logistics, build on brand identity and bolster recruitment in management.

Internet of Things (IoT)-driven startup Intugine Technologies raised an undisclosed amount of funding from IP Ventures’ angel investors. The Bengaluru-based startup said that it plans to deploy the freshly raised capital to strengthen its core operations and also expand its sales team.

Gizmobaba.com, a cross-border marketplace for curated gadgets and accessories, has raised $250,000 (around Rs. 1.72 crore) in a pre-series A round of funding led by LetsVenture. Alok Chawla, co-founder of Gizmobaba.com, said that the marketplace platform aims to scale up the online business and franchise stores in tier-2 and tier-3 towns.

SuperZop, an agri-commerce platform based in Ahmedabad, raised Rs. 8 crore (around $ 1.2 million) from SIDBI Venture Capital, IIM Ahmedabad’s technology incubator and angel investor Gurumurthy Raman in a pre-Series A round of funding. Vipul Patel, vice-president for investments at IIM-Ahmedabad’s Centre for Innovation Incubation and Entrepreneurship (CIIE) said that the funds will be harnessed to scale up the platform’s operations in Mumbai and bolstering its technology platform.

Propelld, an education financing platform based in Bengaluru, has raised Rs. 15 crore (around $ 2.2 million) from Stellaris Venture Partners and India Quotient, among other investors. Existing investor Indian Angel Network fund also participated in the round along with other investors including Raghunandan G, co-founder of TaxiForSure, and Ramakant Sharma, co-founder of Livspace, both of whom participated as members of the Stellaris’ Founder Network.

Venture capital firm Lok Capital and IIFL Asset Management led a Series B funding round in insurance products aggregator RenewBuy, which is owned by D2C Insurance Broking Pvt Ltd. The platform raised Rs. 130 crore (around $19 million) in the round in which existing investor Amicus Capital also participated.

Professional skilling platform Caymus Technology Ventures Pvt Ltd raised Rs. 1.2 crore (around $174,000) in an angel round of funding from a clutch of investors based in India and Silicon Valley. Rob Solomon, chief executive officer of social fundraising platform GoFundMe participated in the round and will be joining the advisory board of the Mumbai-based startup. Kavita Mehta, founder of Caymus Tech, said the freshly raised capital will be deployed for hiring and marketing.

CohortPlus, an online community for product managers and data science enthusiasts, was acqui-hired by professional and vocational education startup upGrad.

The consumer insights yielded by CohortPlus will enable upGrad to augment its offerings for learners, the company said in a statement.

The acquired platform provides a platform to post questions and get perspectives from industry professionals aside from seeking assistance for job interviews on the platform.

The entire team of SocialGIZ, comprising of 10 people, will join Monk Media, the company had said in a statement.

The founder of SocialGIZ, Ameya Adhikari, will join Monk Media Network as a member of the board and hold the designation of vice-president - finance.